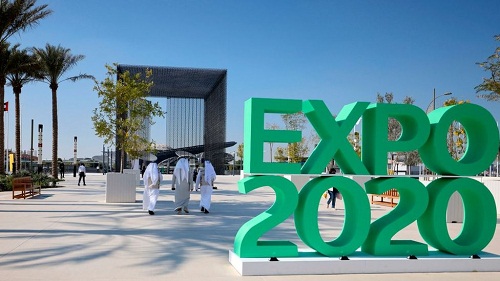 DUBAI: The Expo 2020 Dubai is a meeting of minds from around the globe – but at the French Pavilion they took this one step further and held a 15-minute phone call with an astronaut on the International Space Station.

Speaking on Saturday from the International Space Station (ISS) Thomas Pesquet – who is also an ambassador for the french Pavilion –  praised Expo 2020 Dubai, saying it offered countries a chance to collaborate on projects such as space travel and to tackle global issues such as climate change.

The long-distance call was part of the celebrations for the special Expo national day for France – Each exhibiting nation will have its own “national day” throughout the six-month-duration of Expo 2020 Dubai.

Pesquet hailed the “Lightspeed Inspiration” theme of the pavilion and its message of progress, during his conversation with the French delegation, that included foreign minister Jean-Yves Le Drian, who were visiting the France pavilion at the Al-Wasl Plaza Expo site.

“Global issues require global solutions and countries engagements,” he said, before adding that he hoped to visit the Expo 2020 Dubai site once his ISS mission is complete.

He added that the upcoming Glasgow Climate Change (COP26) conference was the next opportunity to renew commitments to tackling the issue.

Pesquet also took the opportunity to congratulate the UAE on its “Hope” Mars probe, adding that he frequently met with his Emirati colleagues currently in training in Houston.

“Space is a cooperation terrain, a terrain bigger than any nation around the world,” he said. “We need to combine our resources to achieve exceptional/outstanding results, which is what we’re doing at the International Space Station and what the United Arab Emirates are also doing, with us and on an individual level,” he added.

He also highlighted the importance of cooperation between countries in this sector, saying France, UAE and China among others — with the European Space Agency as a common denominator — were encouraging this type of cooperation.

“The tradition of European and French diplomacy with its international element is what I’m try to add and share through my role today (at the Expo), and what France is trying to bring on an international level,” he added.