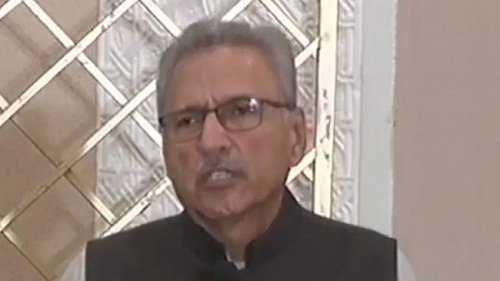 Islamabad : President Dr. Arif Alvi says Pakistan and Saudi Arabia have strong relations based on Islamic, cultural and economic ties for a long.

Addressing an event in connection with 91st National Day of Saudi Arabia in Islamabad on Thursday, he said Pakistan gives immense importance to its relations with KSA as Riyadh has supported Islamabad in every critical time.

The President said relations and cooperation between both countries are exemplary at world level. He assured that every Pakistani will be standing with the Saudi Arabia for its safety and security.

Appreciating the Saudi Vision 2030 of Crown Prince Muhammad Bin Salman, Dr. Arif Alvi said this would be a historical change and turning point for the Islamic country.

The President said that it is unfortunate for the Muslim world that Iraq, Afghanistan and other Muslim countries were targeted on the basis of fake news. He said the Ummah should aware of fake news and prepare for this type of war.

Talking about Pakistan’s efforts for peace in Afghanistan, Dr Arif Alvi said the world is appreciating and acknowledging Pakistan’s support and role in evacuation of foreigners from Kabul after taking over Afghanistan by Taliban.