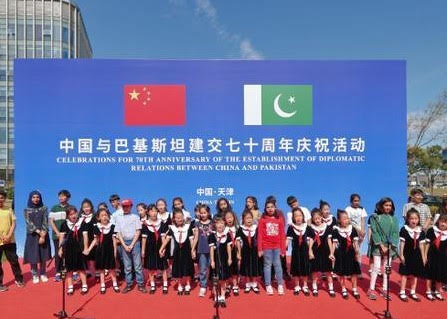 BEIJING, Sep 21 : China’s Tianjin Municipality was declared as sister cities to Karachi and Islamabad respectively and sister-province to Punjab to further enhance the bond of friendship between China and Pakistan.

According to Gwadar Pro, Pakistani Ambassador to China, Moin ul Haque and Mayor of Tianjin Municipality, Liao Guoxun, signed a ‘Letters of Intent’ for establishment of sister-city and sister-province relationships with Karachi, Islamabad and Punjab province.

During the meeting, Li Hongzhong said that China and Pakistan are All-Weather Strategic Cooperative Partners. “Our iron-clad friendship is deeply rooted in the hearts of the people of two brotherly countries.”

He said that commemoration of the 70th anniversary of the establishment of diplomatic relations between the two countries is lifting our strong ties to new heights.

The establishment of Sister-Province/City Relationships with the Punjab Province, Karachi and Islamabad will give a big boost to bilateral pragmatic cooperation and exchanges, he added.

He also proposed to promote practical cooperation in the fields of port management, higher education, science and technology, technical and vocational training and people-to-people exchanges.

Ambassador Haque thanked the Secretary for making excellent arrangements and warm hospitality during his visit to Tianjin.

He said that Pakistan-China unique friendship has always stood the test of time and is growing stronger with the passage of time.

Ambassador Haque noted that Tianjin Municipality being a key port, transportation and aviation hub, education and cultural centre and with its strong IT industry, could be an important partner of Pakistan.

He thanked Secretary Li for his practical proposals and suggested setting up a joint mechanism for follow-up work.