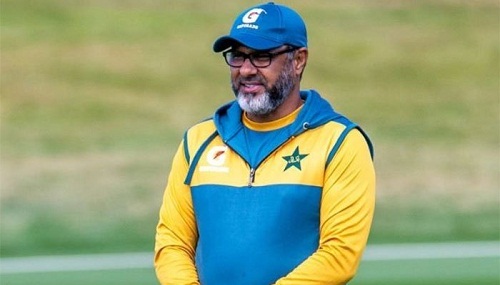 Lahore : Former Pakistan bowling coach Waqar Younis spoke about his resignation for the first time since stepping down from the post, saying that he and Misbah decided to leave “before they got sacked.”

“I had no justification to stay on [as bowling coach] when Misbah resigned,” said Waqar Younis, as per a report in Jang. “Before we got sacked, we decided to resign ourselves.”

Younis said that the coronavirus pandemic and the toll it exacts on players and coaches also became a reason for both former coaches to step down from their roles.

Speaking about the change in leadership of the PCB, Younis said that whenever a new chairman takes over the affairs of the board, it brings with it a different team.

He dispelled speculation of having a hand in the team selection. “I never had any role in selecting the team,” he said. “People always speculated that I had a role in deciding who plays and who doesn’t.”

Waqar Younis praised the World T20 squad selected by Pakistan, saying that all members of the squad were talented individuals. However, he said some players had not put up strong performances while others needed to work on their fitness.

“I am not in a position, at the moment, to criticise anyone,” he said. “Shoaib Malik is the fittest athlete [in Pakistan cricket] at the moment while Azam Khan has a lot of talent.”

Speaking about former captain Ramiz Raja, Waqar said he was the first PCB chairman who was fully aware of Pakistan’s cricket situation.

He said that it is the PCB chairman’s prerogative to appoint the national squad’s captain. The ex-bowling coach also said that he did not have any hand in Sarfaraz Ahmed’s removal from captaincy.

“Removing any player from the squad solely due to his age would be an unjustifiable act,” he said.

He shot back at former Pakistan pacer Aqib Javed, saying that he should be the last person to talk about coaching.

“Talent comes from the first-class and domestic cricket. We were the ones who mentored Shaheen Afridi, Mohammad Hasnain and Naseem Shah over the past two years,” he added.

Waqar said that he would apply for a job with the PCB if he decided that was the way to go in the future.

“Whenever Waqar Younis quit coaching, he went back to commentating on cricket,” Javed had said. “He does only two things–coaching and commentating. [As far as coaching goes] he hasn’t learned that so I would say it’s better if he focuses on learning how to coach [this time],” he had added.

The former bowler had shared his opinion on the resignations of Pakistani coaches who had stepped down from their roles after developing differences with the PCB over the selection of the squad for the T20 World Cup.

He had said that Waqar Younis coached the national squad five times over the last 15 years as either head coach or the bowling coach.

“Even a player doesn’t make so many comebacks to the squad [as Waqar Younis did],” he had said. “But here, coaches are making comebacks.”

Javed had said he was against the board’s hiring process, wondering why people who were not professional coaches were appointed to coach the national squad.