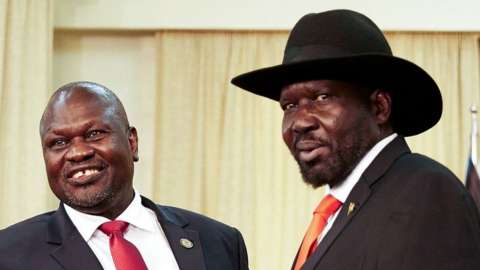 Catholic bishops in South Sudan have expressed frustration at the slow implementation of the revitalised peace agreement which was signed three years ago to end five years of conflict.

The bishops say “the root causes of the conflict must be addressed” in a letter signed by Archbishop of Juba, Stephen Ameyu Martin.

They urged the political leaders to change their hearts and grant freedoms to the people of South Sudan.

“We are also concerned by the shrinking of civic space in our nation. We call for freedom of press, freedom of expression, freedom of speech and assembly, so that all voices can be heard,” the message stressed.

The meeting was attended by the Vatican Ambassador to Kenya and South Sudan, Archbishop Bert Van Megen

Although President Salva Kiir and his former arch-rival, Riek Machar, now First Vice-President, formed a unity government in February last year, they are yet to form a unified national army, a key part of the 2018 peace agreement.

Insecurity is rife in many parts of the country.