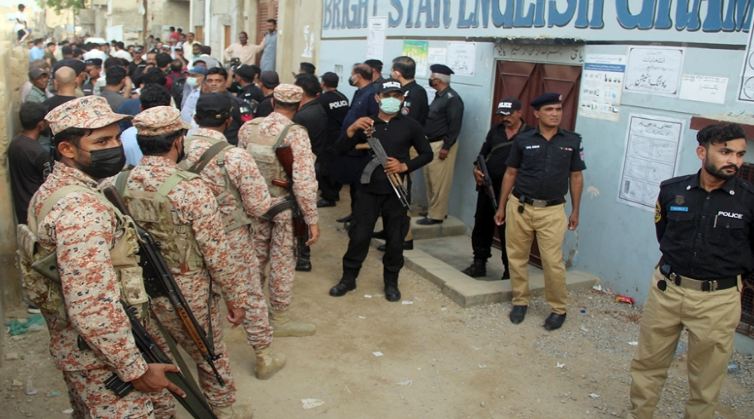 ISLAMABAD, SEPT 13 – The vote count has been completed for the cantonment board elections held across several cities on Sunday. The unofficial results indicate the Pakistan Tehreek-e-Insaf (PTI) has emerged as the largest winner with PML-N a close runner-up. The PPP trailed far behind. The largely peaceful elections were disrupted by sporadic clashes in at least 10 of the 42 cantonment boards that went to the polls.

According to the overall results by Monday noon, these are the number of wards (within cantonments) that each party took across Pakistan:

Paksarzameen Party, the PML-Q and JUI did not have any seats by the noon count Monday. Rawalpindi Walton ward’s election was postponed after the death of one of the candidates.

The police and, at some places, the Rangers provided security as 1,560 candidates competed for 206 cantonment boards seats across the country.

Before the Sunday polls, at least four candidates return unopposed in Punjab while elections were not held at 4 wards in the Kamra cantonment board due to a boycott.

The polling began at 8 am on Sunday and continued uninterrupted until 5 pm. The elections were largely peaceful and no security breach was reported.

However, in some cities, political clashes marred the elections.

PSP, PMLQ, and JUIF were unable to win a single seat.

Some of the contests were neck and neck while some others led to upsets, especially for the PTI.

In Karachi’s Defence and Clifton, people did not vote for the PTI and PPP became the largest party with 13 seats.

In Multan, ten seats were up for grab. However, the voters rejected almost all candidates fielded by political parties, electing 9 independent candidates. Only one PML-N candidate could secure the 10th seat.

In Malir cantonment board’s ward 7, PTI’s Wasif Shah won by just one vote. The candidates from PPP and MQMP obtained 272 votes each.

The names of Karachi’s winning candidates

At ward 4 in the Sialkot cantonment board, the opposition PMLN and the ruling PTI workers confronted each other. Slogans were chanted followed by heated exchanges.

In Gujranwala, the PTI workers took at a man they believed was one of their rivals and beat him. The victim, however, turned out to be a PTI supporter.

In the city, construction workers were seen paving a street with tuff titles as a part of what, they said, was development work being carried out by PTI candidate Sajid Akram.

In Multan, clashes were reported in ward 4 where confrontation soon turned into an active fight that involved kicks and punches. Women workers also got embroiled. The police had to use force to push the battling workers out from the polling station.

At Rawalpindi cantonment board’s ward 1, the clash erupted over setting up a camp at a polling station.

In the Chaklala cantonment board elections, PTI and PMLN workers clashed in ward 8. Political workers accused the presiding officer of collaborating with the ruling party.

In Khyber Pakhtunkhwa (KP) city of Peshawar workers from three major political parties PPP, ANP and JI clashed among them in ward-2 and ward 5. They chanted slogans against rivals and milled around the polling stations. It caused traffic blockage with vehicles forming long queues.

PPP supporters alleged the PTI women MPAs had bribed voters with Rs5,000 each.

In Abbottabad, another major city in KP, workers from PMLN and PTI got involved in a heated exchange at ward 10.

In Hyderabad polling was delayed at a women polling station in ward 2. An old woman alleged the delay was caused by political workers forcing voters to cast ballots in favour of particular candidates.

In cantonment board Faisal, political workers protested and chanted slogans when Federal Minister Ali Zaid entered a polling station. Workers from PPP and other parties alleged that Ali Zaidi’s visit violated the code of conduct laid out by the ECP.

The ECP officials made Zaidi leave the area.

The police and Rangers also responded to a situation in the Malir cantonment board after workers from rival political parties clashed.

In Quetta, at one of the polling stations, supporters of the PTI and Hazara Democratic Party (HDP) clashed when a woman was barred from voting.

The Sindh Governor Imran Ismail cast his vote at a polling station in Defence in the cantonment board Clifton. However, he arrived with his protocol in toe.