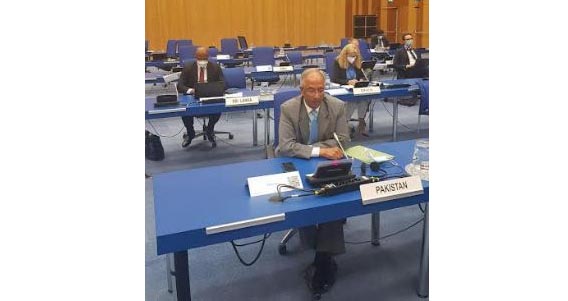 Vienna, SEPT 13 (DNA) – Today, Ambassador Aftab Ahmad Khokher delivered a statement at the ongoing meeting of the Board of Governors of the International Atomic Energy Agency (IAEA) in Vienna.

Speaking under the agenda item “Nuclear and Radiation Safety”, Ambassador Khokher stated that as a country with longstanding experience in the field of nuclear power generation, as well as in the use of nuclear technology in medicine, industry and agriculture, Pakistan attached the utmost importance to nuclear and radiation safety. He said that as a party to several international conventions related to nuclear and radiation safety, Pakistan was fulfilling its obligations to ensure safe and secure operation of nuclear power plants and related facilities.

He highlighted that Pakistan has an independent nuclear regulatory body i.e. Pakistan Nuclear Regulatory Authority, which ensures compliance with the highest safety standards issued by the IAEA.
Along with the annual General Conference, the Board of Governors is one of the two highest policy-making bodies of the IAEA. Pakistan serves regularly on the IAEA Board of Governors and contributes to its deliberations which is a recognition of Pakistan’s achievements in the peaceful uses of nuclear technology.