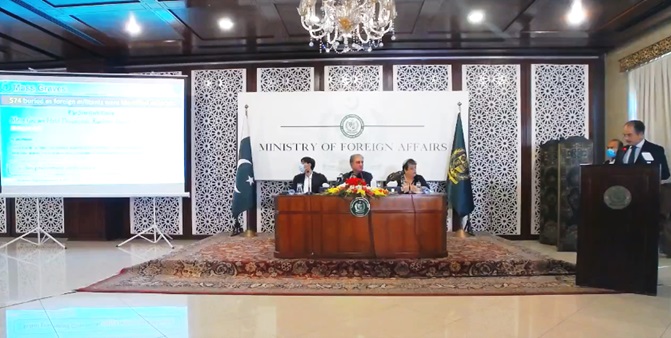 Giving detail of the 131-paged dossier in Islamabad today, Foreign Minister Shah Mahmood Qureshi said the Hindutva-inspired BJP regime has unleashed a series of atrocities against the people of Indian Illegal Occupied Jammu and Kashmir.

The Foreign Minister said the dossier contains three chapters. The first one carries detail of war crimes and genocidal acts of Indian troops.

The second chapter exposes the false flag operations by Indian forces to suppress the indigenous freedom movement in the illegally occupied Jammu and Kashmir.

The Foreign Minister said India is continuing the communication blockade in the illegally occupied Jammu and Kashmir by design to hamper international media and observers from reporting the heinous crimes being committed by its occupation forces.

He said the evidences given in the dossier comprise reports of the international media, the United Nations, and international human rights organizations.

Fifteen audio intercepts of Indian military officers are also part of the dossier, revealing the state sponsored atrocities of the Indian regime in the illegally occupied territory.

Shah Mahmood Qureshi said 3,432 cases of war crimes have been recorded in the document.

He said 118 army units have been involved in human rights violations in the illegally occupied Jammu and Kashmir.

The Foreign Minister urged the United Nations and the world community to compel India to allow access to UN Human Rights Council for independent investigations of these human rights violations in the occupied territory.

Speaking on the occasion, Dr Shireen Mazari called upon international community to play its due role in protecting women rights in Indian illegally occupied Jammu and Kashmir.

He said 239 torture cells were established across the territory to suppress the indigenous freedom movement of Kashmiris.