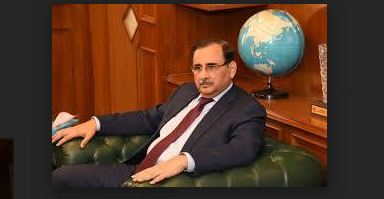 KARACHI /DNA/ – The Federation of Pakistan Chambers of Commerce and Industry’s Businessmen Panel Chairman Mian Anjum Nisar has warned of far higher trade deficit at the end of the current fiscal year 2021-22 than the targeted deficit of $28.4 billion fixed by the government, as trade figures are not as good as being shared by the authorities concerned.

Mian Anjum Nisar said the country’s July-Aug trade deficit has widened 120 percent to $7.5 billion after imports witnessed a new historic peak, with exports growth not matching the pace despite huge depreciation of local currency against the dollar. For the third straight month, exports have been dropping from their previous levels. Our export has long remained around $2 billion per month and the trend does not clearly change despite about 40 percent currency depreciation during the government’s tenure in the past three years. He said that rising imports would not only increase the external borrowing requirements but also dent the foreign exchange reserves, as the exports are not matching the pace of imports while the foreign remittances, which are important source of debt-free financing is expected to grow in single digit.

Mian Anjum Nisar said that previous current account surplus was emerged on the back of a sustained increase in remittances and a smaller trade deficit. To achieve consistency in that trend for a long period without compromising industrial growth the government will have to focus on increasing the exports further and put the business and trade issues on priority, otherwise, the economic problems and balance of payment could further disturb with the growing trade deficit.

The FPCCI former president said the government has already missed its annual export target, requiring at least 6 percent growth, he added. He said that the current export portfolio is marred by a lack of diversification, as few products are exported by some exporters to limited markets. So, a major enhancement in exports requires huge and wide structural reforms.

He, lamenting the gloomy picture of Pakistan’s position in the region with regard to its GDP growth, said that upward trend in remittances to Pakistan from overseas workers is a positive news for the country’s economy. He said that the oversees Pakistanis can invest in housing sector, agriculture, transportation and various other industries, which have huge potential. The government has badly failed to attract foreign investment because the persisting process of approval of projects discourages the investors, he added.

He said that the external trade projections figures have already become irrelevant within two months, showing weakening capacity of the central bank, Ministry of Planning & Development and the commerce ministry, which have been making annual plans, as imports during the Jul-Au period increased 73 percent to $12 while the two-month import bill was equal to 22 percent of the budgeted figures. He asked the economic managers to check the increase in the import of non-essential goods, as the government might face a challenge of an unmanageable current account deficit because of a projected record of $70 billion in imports this fiscal year. He pointed out that Pakistan exports have dropped from their previous levels, as the country’s exports in goods stood at $2.23 billion in August over a year ago, which were higher by 41 percent over the same month of the last year but these export receipts were the lowest in three months. The exports had peaked to $2.73 billion in June, then it dropped to $2.34 billion in July and finally further slipped to $2.32 billion in August.

While the imports last month hit a record high of $6.5 billion, which were higher by 95 percent, leading to widen yearly trade deficit to $4.2 billion in August.

He asked the bureaucracy to mould simple procedures by revisiting the existing processes so that the investors could be facilitated. He called for lowering of import duty on smuggling prone items, increasing the share of direct taxes in revenue and decreasing the slab of indirect taxes to achieve the key economic targets set for the year 2021-22.

He said that a quick turnaround can come from increasing competitiveness of the existing export base and demand-led production of agricultural products, especially high-value agriculture products. The long-term strategy needs structural reforms of the entire export sector, including high tech and innovative products, value-added exports commodities and market diversification towards unexplored markets.