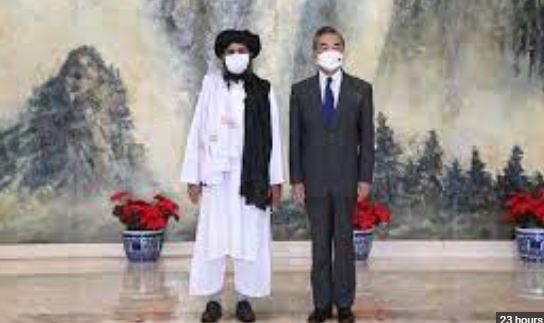 KABUL, SEP 03 (DNA) – The Taliban says China will maintain diplomatic relations with Afghanistan and the new rulers in Kabul will rely on Beijing for economic support after the withdrawal of U.S.-led international forces.

Taliban spokesman Zabihullah Mujahid told the Italian newspaper La Repubblica that China was the group’s “main partner” to halt an economic collapse and rebuild the country.

The Taliban has pledged to be more moderate since they toppled Afghanistan’s Western-backed government on August 15, promising to protect some human rights and refrain from reprisals against old enemies., Radio Free Europe reported

The United States and its allies have closed their diplomatic missions and conditioned any recognition of a Taliban government – as well as economic aid that propped up the previous government – on the group’s actions.

In particular, Western powers are calling on the Taliban to allow people to leave the country, enable access of humanitarian aid, make a complete break with international terrorist organizations, and respect human rights, especially for women.

Without aid, humanitarian organizations have warned of catastrophe as severe drought and war have forced tens of thousands of families to flee their homes. The U.S. government has also frozen Afghanistan’s Central Bank reserves, helping to fuel a banking and payments crisis.

China, however, is unlikely to make aid and political ties contingent on human rights issues, preferring instead hard economic, political, and security interests. “China is our main partner and represents a fundamental and extraordinary opportunity for us because it is ready to invest and rebuild our country,” Mujahid told La Repubblica.

Mujahid said the Taliban are interested in the Belt and Road Initiative, China’s global infrastructure and resource development plan designed to tighten economic and political ties across dozens of countries.

“We own rich copper mines, which, thanks to the Chinese, will be modernized. Finally, China represents our ticket to the markets around the world,” Mujahid. Another Taliban spokesman said on September 2 that China has promised to keep its embassy in Afghanistan open and “beef up” relations as well as increase humanitarian aid.

“The Chinese Deputy Foreign Minister said that they would maintain their embassy in Kabul, adding our relations would beef up as compared to the past… China will also continue and increase its humanitarian assistance especially for treatment of COVID-19,” he wrote.

Close ties between China and the Taliban could undermine the Western strategy of using economic leverage to pressure the new rulers in Kabul. Russia, as well, has maintained its diplomatic mission in Kabul.

Relations with Russia are “mainly political and economic. Russia continues to mediate for us and with us to create the conditions for international peace,” Mujahid said. In a report, Fitch Solutions said on September 2 that it expects Afghanistan’s economy to collapse as international money that funded the previous government dries up.

“The highly disruptive manner in which the U.S.’s security forces left the country and the Taliban takeover will mean that the economic pains for the country will be felt acutely over the short term,” said the research arm of credit ratings agency Fitch Group.

It expects the country’s real gross domestic product (GDP) to shrink by 9.7 percent this year, with a further drop of 5.2 percent next year. Foreign investment would be needed to support a more optimistic case, Fitch said.

“An alternative and more positive economic scenario would entail Afghanistan’s growth averaging around 2.2 percent in 2023-2030, which assumes that some major economies, namely China and potentially Russia, would accept the Taliban as the legitimate government of Afghanistan and begin major investment projects,” it said. = DNA