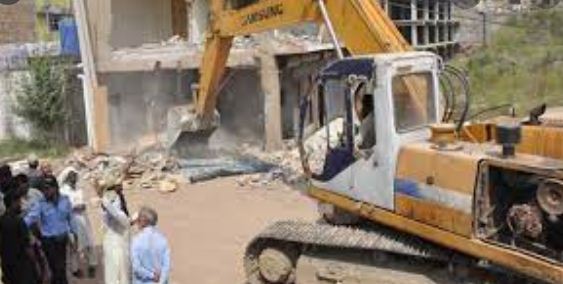 On the special direction of the Chairman CDA, the staff of CDA Enforcement Directorate with the help of District Administration and Islamabad Police conducted a grand operation against encroachments on Service Road of Islamabad Expressway today despite a weekly holiday. Senior officers of the district administration and CDA were also present during the operation.

At the beginning of the operation, 50 iron sheds, 1 hotel, 1 shop, 3 sand and gravel stalls and 1 illegal swimming pool were demolished with the help of heavy machinery. In addition, fruit stalls around Zia Mosque also demolished.

Later, an operation was also carried out against illegal cattle pens along the drain near Korang River, near Margalla Town Phase-II. In this operation, three illegal fences consisting of 18 rooms were demolished from the boundaries of Korang drain. It may be recalled that due to recent rains, spillways have been opened to maintain the water level in Rawal Dam, which causes flooding in the Korang River on the directions of CDA Management

On the occasion, the CDA chairman said that the anti-encroachment drive would continue as per the directions of the federal government to make Islamabad a city free from encroachments.