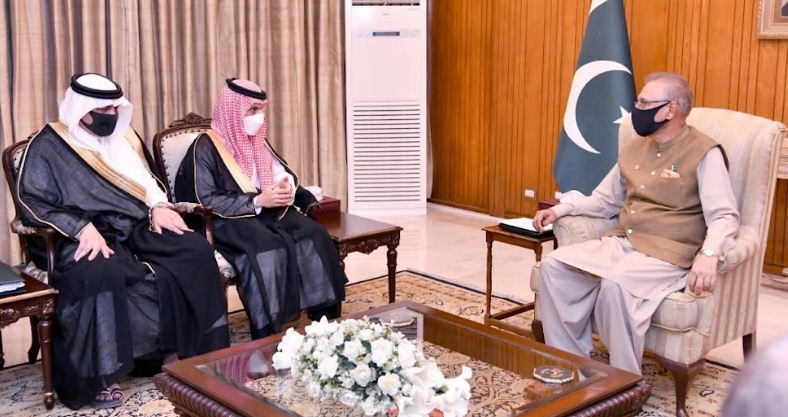 Islamabad, July 27 /DNA/ – Pakistan and the Kingdom of Saudi Arabia (KSA) have underscored the need to broaden the spectrum of bilateral relations in all areas of mutual interests. Both countries reiterated their commitment to institutionalise the bilateral relations so as to make enhanced progress in the areas of trade and economy. This was discussed at a meeting between President Dr Arif Alvi and the visiting Foreign Minister of Saudi Arabia, His Highness Faisal bin Farhan Al Saud, who called on him, at Aiwan-e-Sadr, today.

Welcoming the Saudi Foreign Minister, the President said that Pakistan highly valued its ties with KSA and wanted to further expand economic and trade relations with the brotherly country. He highly commended the vision of Saudi leadership, particularly the Vision-2030 and the “Green Saudi Arabia” and “Green Middle East” Initiative, recently launched by His Royal Highness Crown Prince. He thanked the leadership of KSA for taking care of the Pakistani community during the COVID-19 pandemic. The President congratulated the Saudi Government over the successful organization of Hajj during the global pandemic. He also highlighted the atrocities being committed by India against the innocent Muslims of Indian Illegally Occupied Jammu & Kashmir (IIOJK). He urged the international community to put pressure on India to stop human rights violations and grant the Kashmiris their right to self-determination in accordance with UN Security Council resolutions.

The President asked the visiting dignitary to convey his sincere wishes and warm regards to the Custodian of the Two Holy Mosques, His Majesty King Salman bin Abdul Aziz and Crown Prince, His Royal Highness Mohammed bin Salman. He expressed the hope that the visit of Foreign Minister Faisal bin Farhan Al Saud would further cement bilateral ties between the two countries.

The Saudi Foreign Minister said that both countries enjoyed true brotherly relations and Saudi Arabia desired to maintain the existing momentum of bilateral cooperation. He added that the leadership of his country attached importance to its ties with Pakistan and wanted to further push forward economic relations between the two brotherly countries.