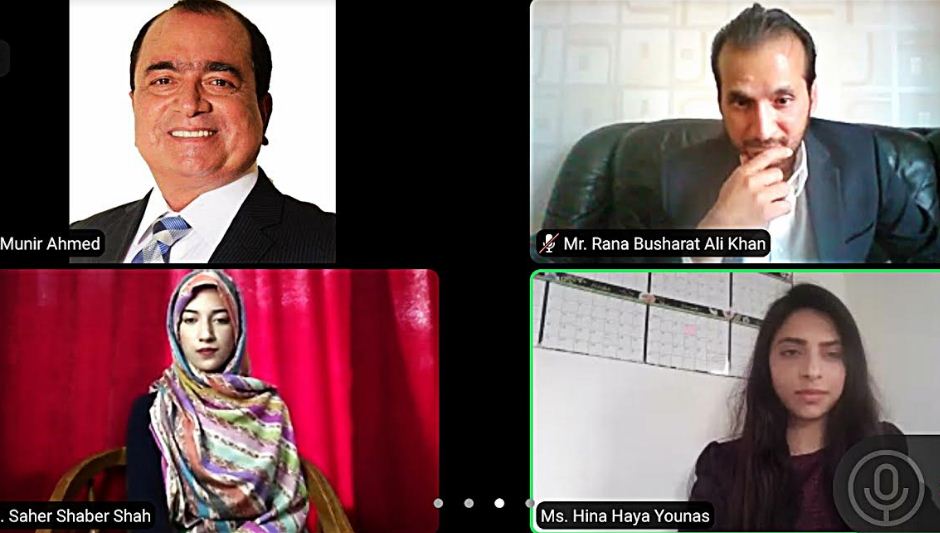 Geopolitical commentator and Devcom-Pakistan Executive Director Munir Ahmed termed the annexation of IHK with India a state terrorism in violation of UN charter.

Geneva: Pakistan government and the people are determined to support people of Indian-Held Kashmir by all means of diplomacy and voicing against the atrocities in the IHK. We all standby the indigenous struggle of Kashmiris that was started almost one hundred years back. There is no doubt that, according to the human rights charter of the United Nations, the right of choice for the future is with the people of IHK.

Devcom-Pakistan Executive Director, geopolitical commentator and human rights advocate Munir Ahmed made these remarks while speaking at the side-event of the 47th session of the UN Human Rights Council here on Tuesday. He was talking online on the Kashmir issue as a keynote speaker from Islamabad at the webinar organized by the International Human Rights Movement (IHRM). The webinar also focused on the lifelong struggle of the detained Kashmiri leader Shabbir Shah, chairman of the Democratic Freedom Party. Her 19-year old daughter Sehar Shabbir Shah also spoke on the occasion as a guest speaker from Srinagar. Hina Haya Younas moderated the webinar.

Munir Ahmed said all the overseas organizations supporting human rights of the people living in IHK should unite together under one platform to consolidate their struggle for a strong voice. It is a good omen that the leaders and the political parties working for Kashmir freedom from the Indian occupation are united on a single platform. The freedom and human rights lovers shall provide conventional and social media platforms to raise voice for the people of IHK.

He said world’s parliamentarians shall be mobilized on the Kashmir cause so that they shall put up the issue in their respective parliaments to pressurize their governments to take pro-Kashmir stance at different forums including the UN. They shall condemn the criminal state sponsored terrorism against the people of IHK. It is such terrorism that the people of occupied Kashmir are facing on a daily basis.

Munir Ahmed said the honour of Kashmiri women is also at stake. Thousands have been gang raped besides killing a million. All these crimes against humanity are committed against the Muslim population of India-occupied Kashmir, who are in a majority there, but not for long if the Modi government and the Bharatiya Janata Party are allowed to carry out their agenda.

Sehar Shabbir Shah, the daughter of the Kashmir leader, said her father and other Kashmiri leaders are going through the worst form of violence. The Indian government has been pushing Hindus into occupied Kashmir as they kill more and more indigenous Muslims. These people from all over India are also being issued domiciles and they are not just entering educational institutions and grabbing jobs, but also taking over land and property. In fact, they are encroaching on and laying claims on land that was rightfully owned by the Muslims of that region.

Rana Basharat, the IHRM chief, mentioned that in violation of Article 13 of the Universal Declaration of Human Rights (UDHR), lockdowns have become a common feature in occupied territories, such as IIOJK, aiming at to disempower, marginalize and suppress peoples movements primarily aimed to deny their inalienable right to self-determination and enforcing unilateral, undemocratic and unconstitutional power to oblige people to stay indoors meaning freedom of movement is fundamentally breached and people are effectively wilfully prohibited from moving around freely.

He referred to the IIOJK lockdown, the most extreme form of lockdown which is weaponized and carried out through systematic and relentless political repression.