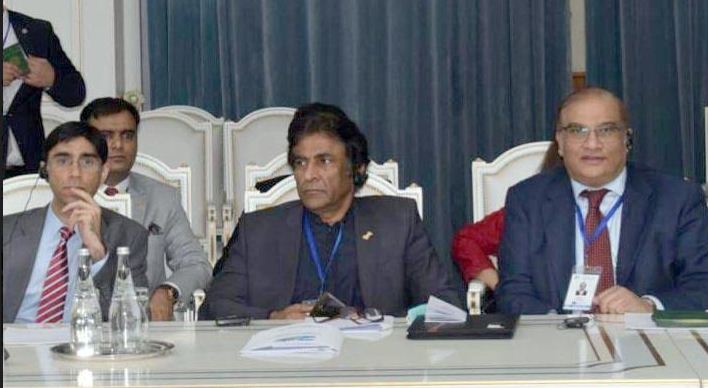 Member states, which include Pakistan and India, issued a joint protocol signed by all the NSAs at the of the meeting.

In his formal statement at the summit, Dr. Yusuf said that Pakistan’s main priority of generating greater economic activity, and reducing un-employment  and poverty alleviation were completely in sync with the SCO’s direction. He apprised  them about Pakistan’s success in fighting Covid 19 pandemic. He stressed the need to counter pandemic’s negative economic impact and highlighted Prime Minister Imran Khan’s efforts to champion the Global Initiative for Debt Relief.

Dr. Yusuf said that the vision of the transformed Pakistan was centered on economic security, adding that the country’s emphasis had shifted from geo-politics to geo-economics.

Dr. Moeed said that failure to attain peace in Afghanistan was the most immediate challenge facing SCO today. As a country historically most affected by developments within Afghanistan, Pakistan is fully committed to supporting a stable, peaceful, sovereign, and united Afghanistan at peace with itself and with the neighbors. “It is our firm view that a negotiated political settlement that is Afghan led and Afghan owned is the only way to achieve this desired outcome”, he added. He cautioned against spoilers, both within and outside Afghanistan, adding that unfortunately, not everyone in the region who professes to prefer peace in Afghanistan does so in reality. He added that Pakistan cannot allow Afghan soil to be used against it.

Dr. Yusuf said that Pakistan condemns terrorism in all its forms and manifestations, including state terrorism against people under illegal occupation. Pakistan has been a victim of terrorism planned, supported and sponsored from across our borders which unfortunately remains a reality even today and has at its roots actors who may present themselves as advocates of global cooperation against terrorism but in reality perpetuate it to create instability in our country and the region, he added. “Terrorism cannot and should not be associated with any race, religion, nationality, civilization or ethnic group”, he further said.

The NSA said that Pakistan does not wish to be part of any camp politics or geopolitical confrontation. “Pakistan’s vision for itself was that of a melting pot for positive global interests”, he stated

Dr. Yusuf also informed his counterparts about Pakistan’s efforts in the area of Climate Change. He said that Pakistan was a low carbon emitting country but one of the most vulnerable to climate change. “Prime Imran Khan has made Climate Change his top priority and has emerged as one of the leaders of the Global South on environment”, he added.

Earlier in the day, the NSA held an important bilateral meeting with his Russian counterpart, Secretary of the Security Council of the Russian Federation, Mr. Nikolai Platonovich extended a special invitation to Dr. Yusuf to hold a full scale bilateral NSAs dialogue. During the meeting, the two discussed issues of mutual interest and expressed satisfaction on the progress of Pakistan-Russia bilateral relations, while sharing serious concern about the evolving situation in Afghanistan.