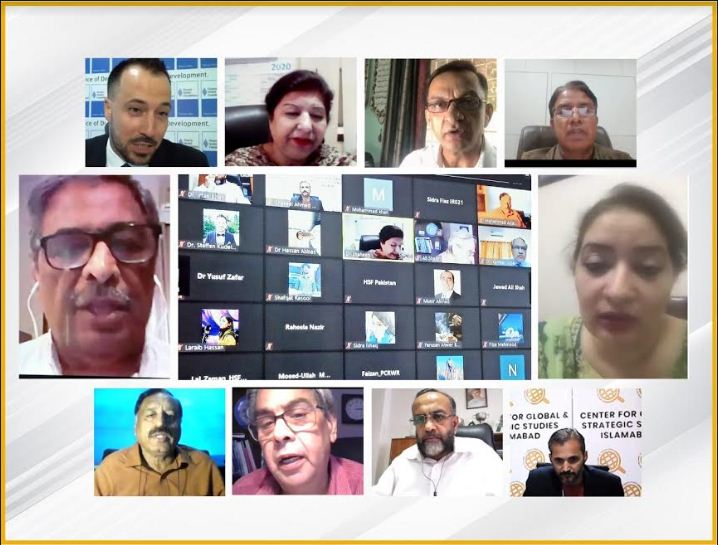 Last year this day was hosted by Germany and Colombia.Dr. Kudella said that it is important for Pakistan to raise awareness on climate change and mitigate its negative impacts. He stated that climate change is both, the rise of the average temperature of the Earth’s climate systemand also large-scale weather shifts. It is one of the most threating situations for Pakistan.

These non-traditional security challenges are non-militaryin nature, but risks to the survival and well-being of people. Dr. Kudella stated that the rising temperaturesare leading to the melting of glaciers in Pakistan. Moreover, they lead to a degradation of ecosystems, impact biodiversity, and cause desertification and flooding, which in turn can cause serious problems such as mass migration, starvation or poverty. He emphasized on the importance of holding these roundtables to address critical issues.

Ms. RominaKhurshidAlam, Member of the National Assembly of Pakistan and Former Secretary of Climate Change Ministrystated that climate change is a subject on which we all need to work cohesively. She said that pollution has also increased in this pandemic and explained that Pakistan has the Climate Committee and is working to mitigate the negative impacts of climate change. She suggested thatin this regard think tanks can play an important role in policy orientation process and Government should implement the devised policies.

Dr. Rashid Aftab, Director of Riphah Institute of Public Policy, Riphah International Universitystated that the outcomes of climate change are devastating as Pakistan is among the top ten most effected countries.This has led to water insecurity. Dr. Rashid explained that climate change can lead to a number of challenges. One is the scarcity of water. Second, water availability will become erratic and put strains on population.Third,this situation will result in higher evaporation rate and raise demand of water.Dr. Rashid said that if these factors are likely to continue, it willincrease frequency of droughts. While concluding, Dr. Rashid suggested that the government should devise policies which can be practically implemented.

Dr. Yusuf Zaraf, TI, Former Chairman, Pakistan Agricultural Research Council (PARC)explained the relevance of climate change with agriculture sector. He statedthat Pakistan energy consumption is low and it is not contributing much to GHG. He said that there are so many plans like agriculture emergency plans. He suggested that if we want our national food security, we should properly opt practicalsolutions. Dr. Yusuf discussed that Pakistan isfacing certain issues related to food security this year which is alarming as our productivity is low. He suggested that isolated actions should not be beneficial, therefore the government should revisit the plan under climate changescenarioand incorporatetechnological advancement in agriculture sector to enhance productivity.

Prof. Dr. Muhammad Khan, Member Board of Experts, CGSSdiscussed that the NTSchallenges transcend the nationalboundaries as they are transnationalin character. They have sudden unexpected appearances. Dr.Irfan said that human security isendangered inSouth Asiabecause of regional sensitivity to climate change. Prof. Irfan stated that as far as climate change is concerned, it has been impacting the humanity. Every country has a strategic linkage and effective policy making to mitigatenegativeimpacts of climate change that need to be explored. Climate change has adverse effect.Therefore, mitigation could not be successful until or unless there is cooperationamong all sectors. Dr. Irfan statedthat water security, agriculture and availability of clean drinking water are the key concerning areas.While concluding his speech, Dr. Irfan suggested that we have to preserve water resourcesand not disturb the natural cycles. He stated that the sooner we realizepreserving water sources, it would be significant for Pakistan and the next generation.

Dr. Shaheen Akhtar, Professor at the Department of International Relations, National Defense University, Islamabadstated that we need to looked between environment change and national security. She stated that climate change is an emerging threat to national security. Dr. Shaheen explained the link ofthese two concepts while highlighting the proponents (international scholars) such as BarryBuzan and Robert Kalpan, who introduced the two conceptasinterlinked. She highlighted that the rising temperature will increase irregular rainfall patterns and precipitation level. She discussed that this situation will lead towards food and water insecurity as they are interlinked. While conducing her discussion, Ms. Akhtar suggested that there has to be sectoral approaches. If there is no preparedness to mitigate these challenges, there would be huge repercussions. She stated that disaster-risk reduction plan and preparedness is important with the involvement of all stakeholders to mitigate the repercussion imposed by climate change.

Dr. Kanwar Muhammad Javed Iqbal, Lead Researcher of the National Institute of Maritime Affairs (NIMA)elaborated that the global community has consensus that climate change has emerged as the issue of national security and human security.  Dr. Kanwar statedthat ocean base economy ismore vulnerable to climate change as sea level is rising.  He also raised points on Pakistan’s drought situation that the Sindh province is highly affected by the droughts, increasing vulnerability to its huge population. He stated that the drought condition has impacted the Melon crops. While concluding, Dr. Kanwar suggested that there is a need to have a national policy on environment plan. He also suggested active engagement and safe participation between multiple think tanks  and relevant stakeholders.

Dr. Sarah Amir, Department of Environmental Sciences, International Islamic Universitystated that the climate change and its impacts is the pressing issue. She discussed that a lot of jargons have been introduced in the last decade like climate smart agricultureor non-traditional security threats and that climate change is not a myth but reality. She suggested that we cannot delay implementing climate change related policies.

Mr. Munir Ahmed, Executive Director of DEVCOM, Pakistanstated that we need to have specific researches. There has been no significant agenda of the working climate committees.  Climate change is the biggest threat. It affects everyone. Therefore, non-traditional security threats should not be handled by traditional method. Mr. Munir stated that there is a need to educate people in each constituency.  He also suggested that the funds that are being given by certain organization and NGOs and how,in this regard, the role of civil society is significant.

Mr. Ali TauqeerSheikh, founding CEO & National Program Director of LEAD Pakistan, and CDKN’s Regional Director for Asiaraised certain significant aspects. He stated that theresponse to non-traditional security threats should be non-traditional in nature. NTS need not be totally domestic or interstates as they are over lapped. Mr. Ali stated that many issuesthat are domestic also becomeregional or international. He gave examples ofclimate-relatedtransboundaryissues i.e.,cyclones and tsunamis, air pollution, smog, migration and refuges, pandemic and epidemics. While suggesting, Mr. Ali stated that NTS need not be a zero-sum game. By adopting effective policies, it can be a win-win situation if common grounds are crafted to work together. Mr. Ali discussed that NTS can be process oriented. Therefore, NTS need intelligence with engagement of knowledge economy.

Brig Muhammad Aslam Khan (Retd), Chairman Gomal Daman Area Water Partnership Pakistanstated that we need effective strategies to beat climate change. Therefore, Pakistan should undertake reforms plans like the KP government.  Dr. Aslam also suggested that there should be effective water management program along with protection and restoration of ecosystem. Dr. Aslam highlighted the role of youth in buildingawareness. While concluding, he stated that government alone cannot do anything on its own and that community efforts are required.

Dr. Hassan Abbas, Chairman Forte, Integrated Water Resources Management stated that we should not forget that a lot of products which we are using are importedmaterials. Therefore, we have to do careful consideration to our consumption related to industrial GHG emissions. He emphasized that water is the most impacted element by the climate change. He explained that we have developed infrastructure to modify our natural flow regime. Dr. Hassan recommended that before focusing on one type of solution like the old-mind set of diverting rivers, weshould move toward alternatives to manage water. Therefore, climate change should be discussedwidely in parallel to invest in same amount of investment in developing the alternatives.

Mr. Faizanul Hassan, Director, Pakistan Council of Research in Water Resources (PCRWR)discussed that the challenges are due to climate change. In this regard, there are some questions we need to answer related to climate change its vulnerability and mitigation. Mr.Faizan statedthat theGermanwatchGlobal Climate Risk Index 2021has placed Pakistan among top 20most vulnerable countries. He explained that climate vulnerability has been ignored. Therefore, there is a need to generate awareness among people regarding the issue of climate change.

The Online Roundtable was moderated by Mr. ShakeelRamay, Advisor, Asian Institute of Eco-civilization Research and Development, Consultant SDPI & Member Board of Advisors, CGSS.A total number of 80 participants from all across Pakistan attended the online roundtable discussionand was also viewed live on various social media platforms.