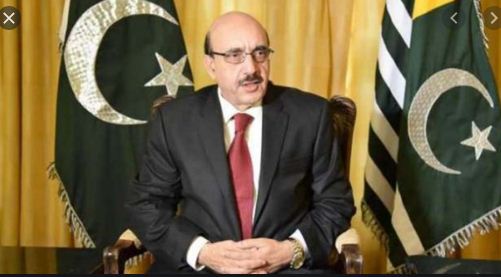 In a special message, the AJK President reiterated his unflinching resolve that the struggle to get freedom from the oppressive Indian occupation and the realization of the right to self-determination would continue relentlessly and the mission left incomplete by Kashmiri martyrs would be accomplished.

“We vow to carry forward the mission of Kashmiri martyrs who offered supreme sacrifice of their lives to get rid of the oppressive foreign rule,” he asserted.

Describing Mirwaiz Moulvi Mohammad Farooq and Abdul Ghani Lone as robust voices of the Kashmir freedom struggle that were targeted by the oppressor to weaken the liberation struggle, AJK President said that their supreme sacrifices instead gave a new lease of life to the struggle for the right to self-determination.

Khan also paid homage to the martyrs of Hawal on the day of their martyrdom and said that the sacrifices offered by these martyrs will never be forgotten by the people of IOJK, AJK, and Pakistan.

The intensity of the long struggle of the Kashmiris for freedom that has withstood decades of suppression and has grown stronger neither will reduce nor killings, arbitrary detentions, torture, and other brute tactics can dampen the spirit of freedom, he said.

“We salute our brothers and sisters living on the other side of LoC with firm assurance that the people of AJK and Pakistan are fully behind them and they will never leave them alone,” he assured.

He went on to say that the people of Jammu and Kashmir have been fighting for their freedom and right to self-determination for more than seven decades and they are determined to continue it till they are given a right to decide their political future through an UN-supervised referendum.

About the international support to the Kashmir peoples’ struggle for their right to self-determination, President Khan said since 2016, after the martyrdom of Burhan Wani and August 2019, when Indian troops invaded and besieged IOJK, Kashmir has been significantly internationalised.

The Kashmir dispute, he said, discussed in the UN Security Council, the European Parliament, the US Congress, the British Parliament, and the ASEAN parliaments, among others.

It (Kashmir issue) has been covered extensively by the international media and taken up by leading international think tanks and human rights organisations. This has hurt India because it has been called out, and India now wants to seek indemnity and immunity for its crimes against humanity in IOJK, he concluded. = DNA