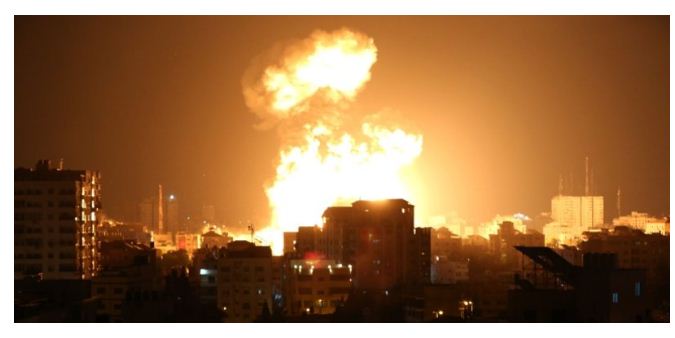 Besides expressing solidarity with Palestine, the Muslim world should provide military support for Palestinians that give them the ability to defend themselves, said a US academic.

In an interview with Anadolu Agency, Hatem Baizan, a lecturer at Ethnic Studies Department University of California Berkeley, said condemnations of Israeli attacks by the Muslim countries “does not change the equation”.

“And it’s [Israel] unleashing its military power on the Palestinians completely unarmed,” said the lecturer, noting that the Palestinians are confronting the fourth largest army in the world.

In criticism to the Islamic world, Baizan said major Muslim countries have airplanes, rocket launchers as military equipment, among others.

“They’re using it against Yemen… They have the complete absence of engagement or supporting the Palestinians who are fighting settler colonialism,” said the academic.

“And I think the Muslim world should be put to the test, emotional support is not sufficient. And it’s not enough just to go out on the street and protest. You have to actually engage and see how you could support the Palestinians,” said Baizan.

Tensions that started in East Jerusalem during the Muslim holy month of Ramadan spread to Gaza as a result of Israeli assaults on worshippers in the flashpoint Al-Aqsa Mosque compound and Sheikh Jarrah neighborhood.

The Palestinians were protesting Israel’s planned but later delayed move to evict hundreds of people from Sheikh Jarrah.

Baizan said the Israeli settlers are moving in a systematic strategic way to gain a foothold on the access and the direct neighborhoods that are directly connected to the Al-Aqsa area.

“The idea for them, there’s been the effort to try to rebuild the Third Temple by destroying Al-Aqsa Mosque and the Dome of the Rock […] They already have the designs the plans,” Bazian said.

He claimed that the planned evacuations and the confiscation of Palestinians’ homes need to be understood as part of this long-term strategy.

“That’s how we at least need to look at the attacks on Sheik Jarrah and Al-Bustan and other areas to isolate Haram al-Sharif area from the broader Palestinian population in Jerusalem by creating this Zionist corridor in there,” he added.

Stating that the Israeli government is gradually shifting to the far right, the Palestinian origin academic said that the election of Donald Trump in the US in 2016, for Israeli Prime Minister Benjamin Netanyahu and the Israeli right-wing political spectrum was “almost an open season […] to unleash all types of violence on the Palestinians”.

“I do think now with the Biden administration, Netanyahu is trying to test the grounds,” Bazian added.

Pointing out that both Republicans and Democrats in US politics are extremely committed to supporting Israel, he said Netanyahu prefers a Republican administration like Trump rather than a Democrat like Biden.

“Netanyahu is on the losing end right now, since he was unable to form a new government. And in Israeli political circles, anytime that your political fortunes are low, you foment a crisis with the Palestinians, you beat up on the Palestinians, and you come up with soothing your muscles to say that you are a strong leader,” added Bazian.

In ongoing Israeli attacks on the besieged Gaza Strip since Monday, at least 213 Palestinians have died on Tuesday, including 61 children, 36 women, and 16 elderly people, according to the Gaza-based Palestinian Health Ministry.

As many as 1,400 people have also been injured in the attacks, and the UN said Israeli attacks have made about 2,500 Palestinians homeless after their houses were completely destroyed. Roughly 38,000 Palestinians have been displaced.

Ten Israelis have also been killed in Palestinian rocket fire from the Gaza Strip into Israel.