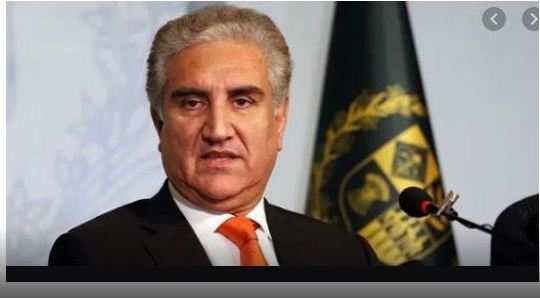 ANKARA, May 18 (DNA): Foreign Minister Shah Mahmood Qureshi who is in Turkey has said that contacts are being established with different countries to get stopped the Israeli persecution of Palestinians.

In a statement on Tuesday, the Foreign Minister said the Muslims residing in European countries must also play their role in this regard.

Shah Mahmood Qureshi said the bombardment in Palestine has resulted in power outage and affected the supplies of essential commodities. He said it will be lamentable if the international community remained silent on the Palestinian situation.

The Foreign Minister said Israel is further complicating the matter and its bombardment is making it impossible for the Palestinians to access the healthcare facilities.

Earlier, Foreign Minister Qureshi on Tuesday reached Ankara on an extensive diplomatic mission to attract the world attention towards the deplorable situation in Palestine where Israeli airstrikes hammered the Gaza Strip killing more than 200 people.

FM Qureshi will leave for New York along with the foreign ministers of Sudan, Palestine and Turkey.  He will hold meetings with important personalities in New York.

In New York, he will speak at the United Nations General Assembly session, meet various dignitaries and hold talks with local and international media representatives and present Pakistan’s views on the situation in Palestine.

The foreign minister also called for media to play an active role to awaken the world to the Israeli aggression against the defenceless people in Palestine.

To a question, he said the Organization of Islamic Cooperation was also playing its part and many other countries too had activated considering the seriousness of the situation. He said the UN General Assembly session was convened after the UN Security Council could not evolve consensus. He said being the most important body, the UNSC was responsible for peace and security in the region as well as the world.

Foreign Minister Qureshi said Prime Minister Imran Khan had a very clear viewpoint on the issue who, he said, called him and said “go all out” for it being an issue of the faith as the Israeli forces attacked Qibla-e-Awal which was symbol of oneness.

To a question, the foreign minister said the situation was evolving and in diplomacy, disappointment was never allowed to dominate rather the challenge was taken as an opportunity. DNA