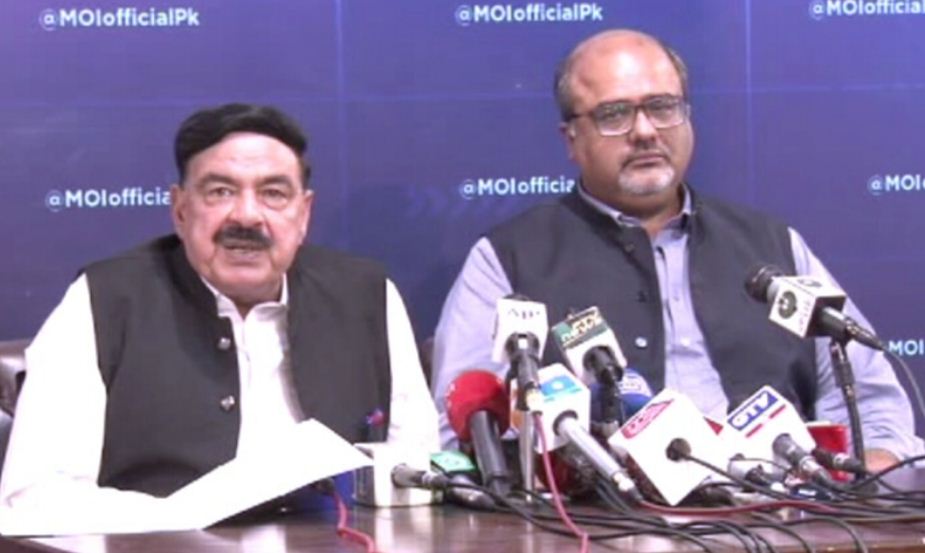 ISLAMABAD, MAY 12 – Interior Minister Sheikh Rashid on Wednesday disclosed that a subcommittee of the federal cabinet had recommended placing PML-N President and Leader of the Opposition Shehbaz Sharif’s name in the Exit Control List (ECL) to prevent him from leaving the country while cases against him were ongoing.

Addressing a press conference in Islamabad alongside Adviser to the Prime Minister on Interior and Accountability Mirza Shahzad Akbar, Rashid said the cabinet would accept the recommendation today or tomorrow (Thursday).

He said that when the names of other people accused in cases were placed on the ECL, then Shehbaz could not be given “special treatment” according to Article 25 of the Constitution.

The National Accountability Bureau (NAB) had sent a request to place Shehbaz’s name on the ECL which was deemed to be “correct” by a three-member subcommittee of the cabinet, he said, adding that the subcommittee decided unanimously to send a recommendation to the cabinet for approval.

Rashid said Shehbaz could submit an application within 15 days to the interior ministry against the cabinet’s decision and could also choose to appear personally during the review. After the application was received, the ministry would have to take a decision in 90 days, he said.

The minister claimed that Shehbaz had tried to run away at Sehri — referring to the PML-N leader’s attempt to take a flight to Qatar last week which he was not allowed to board — because the Hudaibya Paper Mills (HPM) case was being reopened.

The government had also decided to challenge the recent Lahore High Court (LHC) decision to grant bail to the opposition leader along with permission to go abroad for medical treatment.

The HPM case involving Rs1.242 billion had been initiated in March 2000, with the Sharif brothers said to be the main accused, when the NAB authorities moved a reference. Maryam Nawaz, Hussain Nawaz, both children of the ex-premier, as well as Ishaq Dar were among other accused.

During today’s press conference, Akbar said an impression was being built the HPM case could not be opened again. “It is the law, even besides this case, that if any new evidence is found that was previously not part of the case, [the closed case] can be reopened.”

The PML-N has become an “expert at misleading” in the last few years, Akbar claimed. “They are building the narrative that they were acquitted in the Hudaibya Paper Mills case. This is not true.”

The adviser said the PML-N leaders would have been considered to be acquitted if the trial had proceeded. The case was closed on technical grounds, he recalled, terming the HPM case the “mother of all money laundering cases in Pakistan”.

He said the case had never gone to trial because the Sharifs “made a deal” and fled to Jeddah, Saudi Arabia in 2000. The LHC decision stated that neither the NAB nor the federal government wanted to pursue the case so it was “closed on technical grounds”, he added.

“The institution that should have appealed did not do so in time and when it did after years, of course, the Supreme Court said the time had passed. This is why the case was closed. Factually, it has not ended.”

He shared that the government’s legal team, the attorney general as well as private counsels believed the case could be reopened because “we have evidence”.

“Crime was committed. A lot of money laundering was done in the Qazi family’s name and the Sharif empire was set up. The Sharif empire progressed in two different decades — in the 90s and after 2000.”

Akbar said that other cases related to the Sharifs would also be reopened. “The case was closed but the crime exists. Because that is being opened, their attempts to flee are increasing and the government will take action on that as well.”

He said the subcommittee had made the recommendation to place Shehbaz’s name in the ECL because a case against him was ongoing at an accountability court in Lahore. Other cases, including the Ramzan Sugar Mills case, Chaudhry Sugar Mills case and other investigations by the FIA were ongoing against Shehbaz, he added.

“If Shehbaz was allowed to leave, all these cases would have faced delays and would be an infringement on the rights of the co-accused in the cases,” he said.

After obtaining bail, Shehbaz was about to fly to London on May 8 when an FIA team at the airport stopped him from travelling on the ground that his name had been on the list of persons barred from leaving the country.