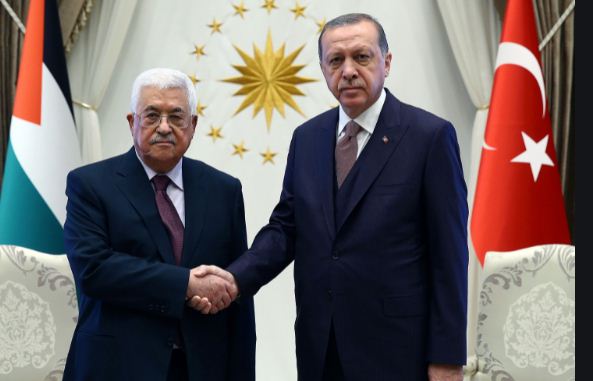 RAMALLAH, MAY 10 (DNA) – President Mahmoud Abbas today received a phone call from his Turkish counterpart, Recep Tayyip Erdogan, during which they discussed the recent serious developments in occupied East Jerusalem and the Israeli assault against the Palestinian people and worshipers at Al-Aqsa Mosque, which led to the injury of hundreds of worshipers.

They also discussed the attacks on Palestinians residing in Sheikh Jarrah neighborhood of East Jerusalem and attempts to forcibly displace them from their homes and seize them for the benefit of the settlers.

President Erdogan affirmed that Turkey stands by the Palestinian right to defend Jerusalem and its Islamic and Christian holy places against Israeli assaults.

He said his country will continue to press on the regional and international levels for an end to the continuous Israeli attacks against the Palestinian people, stressing that he had instructed his foreign minister to do what is necessary and contact international parties to pressure the Israeli government to stop its ongoing attacks against Jerusalem and its holy places.

For his part, President Abbas thanked President Erdogan for Turkey’s stances in support of Palestinian rights, stressing that the Palestinians are conducting intensive contacts at the international level to stop the dangerous Israeli escalation against the Palestinian people, especially in Jerusalem and its Islamic and Christian holy places, and Sheikh Jarrah neighborhood.

He said that these difficult times that Palestine is going through require closing Palestinian ranks to confront what is happening in Jerusalem, ending the division and forming an internationally-acceptable Palestinian government.