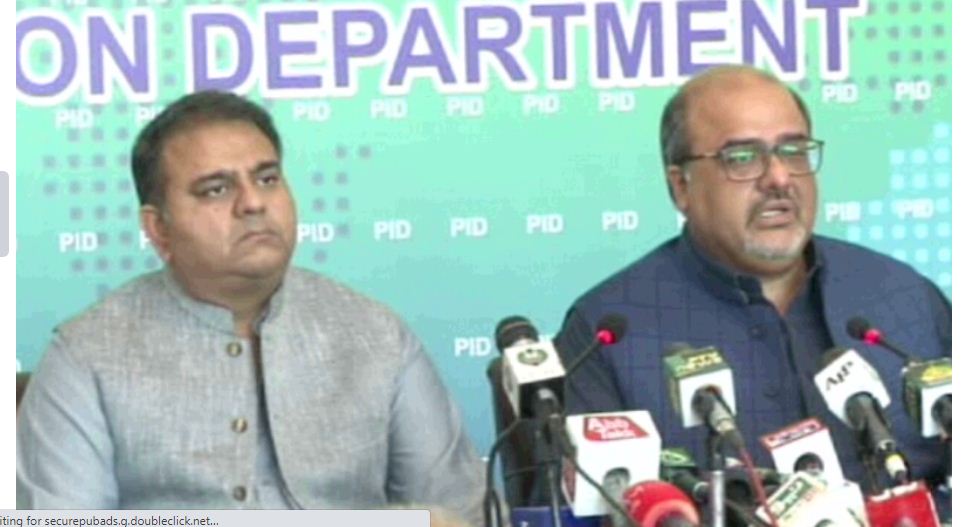 ISLAMABAD – Federal Minister for Information and Broadcasting Fawad Chaudhry wondered on Sunday how the government could trust PML-N president Shehbaz Sharif’s guarantee to return to the country when he hadn’t been able to fulfil the same assurance for his brother PML-N supremo Nawaz Sharif.

Addressing a press conference in Islamabad along with Adviser to the Prime Minister on Interior and Accountability Mirza Shahzad Akbar, he said: “The question is how can Shehbaz Sharif’s guarantee [to return] be accepted when he couldn’t fulfil another absconder’s guarantee?

“When he was giving Nawaz’s guarantee, we had the hope at the time that NAB (National Accountability Bureau) and the court would call him and ask that he had given guarantee for Nawaz and had to come back with him so where has he (Nawaz) gone?”

The minister said the opposition had the same stance and pointed to PPP co-chairman Asif Ali Zardari’s call for Nawaz to come back during a conversation with PML-N Vice President Maryam Nawaz.

“The opposition itself thinks that Nawaz is a mafroor (fugitive).”

Chaudhry alleged that Shehbaz had previously visited London due to complaints of “back pain” and yet videos later surfaced of him “running in the streets; there was no problem”.

He said Punjab Health Minister Dr Yasmin Rashid was much more ill than Shehbaz and yet was continuing her treatment while staying in Pakistan and was also steadfast on the Covid-19 front so “does it not suit Shehbaz and Nawaz, who have led the government for a long period, that they get their treatment done in Pakistan?”

The Lahore High Court on Friday had granted Shehbaz ‘conditional permission’ to travel to the UK for medical treatment from May 8 to July 3.

Citing “procedural hiccups”, however, the Federal Investigation Agency had stopped him on Saturday (yesterday) from leaving the country for London. Immigration officials had told him that he could not board the flight as his name was on the Provisional National Identification List (PNIL).

Chaudhry praised NAB chairman retired Justice Javed Iqbal and the current NAB administration for “cementing their place” and recovering Rs400 billion and depositing it in the treasury. He also lauded the courts for their decisions in cases such as the Panama Papers case, saying a perception was created that the legal system was part of the “war against corruption”.

“In some instances, however, people think the system hasn’t changed and this is the reality as well,” he said, adding that the manner in which permission was granted to Shehbaz to go abroad was a reflection of the “rot in the system”. He also questioned the speed with which his application was heard and decided.

He said the way the PML-N leader had come out of jail gave the impression that powerful people could “get out by breaking the web, while small flies are getting trapped in this web”. “Our society will be destroyed because of this and will face immense harm if the common man thinks there is one law for the powerful and another for weaker people,” he stressed.

Chaudhry said the government had great respect for all court decisions but there were legal options available for this decision and it was its legal right to appeal it.

“Our stance is clear. We say the law should be equal for the Sharif family and for the common people, and the small thieves should get the same rights as the big thieves.”

In his remarks, Akbar said all court orders like this “are challenged in court and there is a process to it”.

He said the reason the government was shedding light on the issue was due to what he alleged were attempts by the PML-N to “mislead the nation”. He claimed that Shehbaz had not properly assisted the court.

The adviser clarified that the Supreme Court had deliberated on the PNIL, and standard operating procedures existed for it.

“Because issues have been raised regarding it and some clarifications are [needed], the government will appeal this order on those basis and after that it will be seen what the next step will be.”

Commenting on the release of the detailed LHC verdict on Shehbaz’s post-arrest bail petition in a money laundering reference and responding to accusations of a lack of evidence presented by the government, Akbar said he had brought forward 55 volumes of which 54 volumes contained evidence.

He also said the detailed bail order had been against Supreme Court instructions to keep high court bail orders short and to not comment on the merits of the case because that would make it prejudicial. “This is challengeable, this is a ground for appeal,” Akbar added.

He said the detailed order had framed three questions: could bail be granted on facts and merits?; is there medical ground in the case on which bail could be granted?; and could there be bail on the basis of a delay in trial?

He said that for questions two and three, the bench had agreed with the decision of Justice Asjad Javed Ghural, with four judges saying that there was no medical ground in the case or any reason to grant bail due to the length of the case. According to Akbar, this created a contradiction with the order for conditional permission to go abroad since it was given on medical grounds.

“This is a clear contradiction, same accused and the same matter. This is a first and very fair ground for appeal.”

He added that Shehbaz going abroad would mean the trial wouldn’t be able to proceed and this was “another consideration which should have been in front in the case and because these people did not assist the court, this makes an appealable ground”.

Akbar also addressed numerous points in the detailed verdict and provided rebuttals and explanations. He observed that the order stated that Shehbaz’s income source was not investigated, but the IO report did contain the details on his assets accumulation. “This is clear proof that all these contradictions are present and this is an appealable order,” he emphasised.