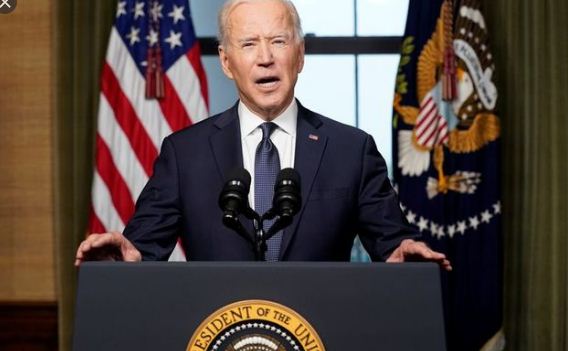 United States President Joe Biden is briskly realizing his political promises made during his election campaign. No segregation, whether the promises were logical or merely politically motivated to win from the unconventional States for the Democrats. In the last two weeks, he has taken up three of his promises being termed very significant globally. The most important one is to pull out the NATO and the US troops from Afghanistan. It began this weekend without finalizing any roadmap for a sustainable solution for peace in the region.

All stakeholders genuinely fear that it would lead to talibanization of Afghanistan once again. All the years-long hectic efforts go uncultivated. The question is if the pullout is being done in haste to charm the Taliban or it is a deliberate action for some hidden strategic reasons for the region? This part of the story needs to be discussed at length. Maybe next time.

The United States has returned to the Paris Agreement 2015 with an online Biden’s Climate Conference on April 22-23, 2021. Indeed a rational decision that culminated with an outline for the US interventions on climate change and a roadmap to COP 26. It is much appreciated globally.

Another globally weighty step President Biden has taken is to formally recognize the mass killing of Armenians in the Ottoman Empire during World War-I as a “genocide”, a move that was immediately rejected by Turkey. Pakistan has also shown its solidarity with Turkey immediately after the US president made his decision public.

In a statement on last Saturday April 24, Biden became the first US president to formally recognize “the killings of an estimated 1.5 million Armenians” in the Ottoman Empire, which began in 1915, as an act of “genocide”.

Armenians mark April 24 as “Armenian Genocide Remembrance Day” to remember the lives of all those who died in the Ottoman-era terming it ‘genocide’ and recommit themselves to preventing such an atrocity from ever again occurring.

Biden’s declaration that “the American people honour all those Armenians who perished in the genocide that began 106 years ago today.” It comes amid strained ties between the US and Turkey, which had earlier warned that recognizing the killings as a genocide would further harm relations between the NATO allies.

The US recognition of Armenians’ ‘genocide’ is not a sudden decision based on an election campaign commitment. The Armenians campaigned for years to force the US and other countries around the world to recognize the killings as a genocide. In a letter written by more than 100 members of the US Congress a week before the decision was taken urged Biden to recognise the killings as genocide. It shows a political pressure was built on the US president.

Armenian Prime Minister NikolPashinyan has termed it “the US unwavering commitment to protecting human rights and universal values”. A US-based Armenian advocacy group, The Armenian Assembly, also called it “a watershed moment in U.S. history”.

Turkey has fairly acknowledged the deaths of Armenians in the Ottoman Empire during World War-I, but has steadfastly denied that the killings were systematically orchestrated and constitute a genocide. In a statement, Turkey’s foreign ministry has rejected Biden’s statement as being without any “scholarly and legal basis” and said the conditions required to describe the events as a “genocide” are not met under international law.

“The nature of the events of 1915 does not change according to the current political motives of the politicians or domestic political considerations. Such an attitude serves only a vulgar distortion of history.”

Framing Turkey for the Armenians “genocide” after 106 years without any scholarly research is being termed President Biden’s worst decision in the first 100 days of his regime. The decision is being clearly judged as politically motivated to pressurize Turkey for his independent decision-making. Turkey has also been raising voice against the blasphemous acts and actions of the West and the United States very bluntly for quite long now. Promoting and propagating Islamic values and traditions of the Ottoman Empire globally, and taking steps for gradual transformation of Turkey to a more Islamic environment are said to be the other reasons.

US-Turkish relations have been strained in recent years over a number of strategic issues including closing ties with Russia and China. Ankara’s purchase of Russian-made S-400 missile defense systems is being considered as a big bump. Surprisingly, Biden while informing Erdogan of the planned “Armenian genocide” recognition during a phone call also conveyed his interest in building “a constructive bilateral relationship with expanded areas of cooperation and effective management of disagreements”. Well conveyed.

The two presidents also agreed to hold a bilateral meeting on the sidelines of a NATO summit in June. So, Turkey has about two months for his lobbying across the friendly and like-minded countries and to get the ‘symbolic decision’ reversed or its impact defused. The Muslim leadership and the independent media shall stand united against the US decision to defuse pressure that is mounting on Turkey at the moment. Indeed an urgent counter narrative needs to be developed and propagated against the US, the EU and the UN statements against the Muslim sentiments and religious prejudices.

Turkey needs to have more dynamic and active ambassadors leading from the front in mobilizing political and diplomatic support from their respective stations through advocacy, media and communication interventions. I hope the Turkish embassy in Islamabad would also be more active and responsive in the days to come.

The writer is a freelance journalist and broadcaster, Director Devcom-Pakistan, a policy advocacy and outreach think tank in Islamabad. His email: devcom.pakistan@gmail.com Twitter Handle: @EmmayeSyed