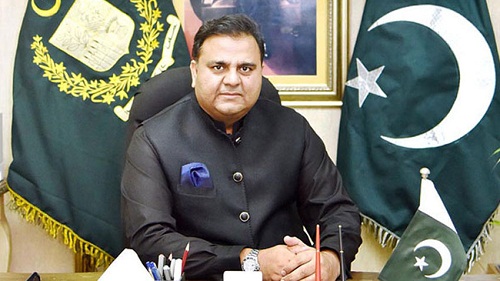 Islamabad : Minister for Information and Broadcasting Chaudhary Fawad Hussain has reiterated the government’s commitment to ensure free and independent media in the country.

In his message on the occasion of World Press Freedom Day, he said the government under the leadership of Prime Minister Imran Khan regards the freedom of press as a fundamental, democratic and constitutional right.

The Information Minister made it clear that there is no concept of media censorship in the country. He said the media in Pakistan enjoys unprecedented freedom. He said the government neither believes nor practices any press advice. Rather, it encourages self-regulation by the media.

Chaudhary Fawad Hussain said the government is taking all possible measures to create a congenial environment for the journalists to perform their professional obligations.  He said the steps undertaken to ensure welfare and security of the journalists and media workers include the 8th Wage Board Award and the establishment of Information Commission. He said his ministry fully supports the idea of Journalist Protection Act which will go a long way in ensuring safety and security of the journalist community.

The Information Minister said we are also keen to equip the media with modern technologies and improve the human resource.

Chaudhary Fawad Hussain said the working journalists under a certain criteria will be accommodated in the Prime Minister’s Housing Scheme. He said the government is also contemplating to award health cards to the journalists to enable them avail healthcare facilities for themselves and their families.

The Information Minister assured that the government will continue to facilitate the growth of free and responsible media and ensure the safety and security of the working journalists.

Meanwhile, in his tweets, Minister for Information and Broadcasting Chaudhary Fawad Hussain paid tributes to those journalists who laid down their lives in the line of duty.

The Minister pointed out that the journalists in Indian illegally occupied Jammu and Kashmir, Palestine and other areas go through daily hardships to write the truth.

Chaudhary Fawad Hussain said it is part of our agenda to introduce new media technologies and new projects will also be brought this year especially for the young journalists.