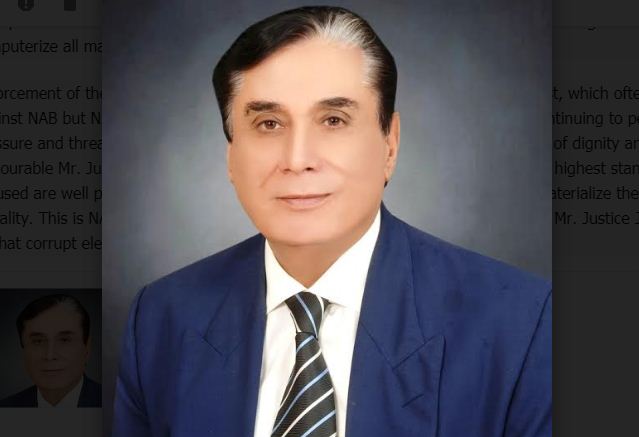 Today, eradication of corruption has become the voice of the whole nation as it not only halts the progress of the country but also usurps the rights of the deserving people. Pakistan is facing the challenge of corruption which is the root cause of all problems being endured by the country. The National Accountability Bureau (NAB) was established in 1999 to cope with the menace of corruption and corrupt practices.

When Honorable Mr. Justice Justice Javed Iqbal took over as Chairman National Accountability Bureau, he chalked out a comprehensive Anti corruption strategy comprising awareness, prevention and enforcement under “Accountability for All” policy. Besides overhauling and perfecting working procedures in order to make NAB a more credible and reputed organization to eradicate corruption in all its forms and manifestations. The Chairman NAB knew it fully well that the path ahead is extremely thorny and will require extraordinary determination and courage to tackle rampant corruption and misuse of authority, money laundering, assets beyond known sources of income and cheating the public at large in the highest echelons of power.

He brought in a vision founded in his lifelong commitment to upholding the principles of justice, transparency, fair play on merit as per law during his illustrious and remarkable career as a session judge to acting Chief Justice of the Supreme Court of Pakistan spanning more than four decades.

Honorable Mr. Justice Justice Javed Iqbal, Chairman NAB has rejuvenated NAB in the last more than three years by implementing his Accountability for All Policy across the board under the slogan of “NAB’s Faith-Corruption free Pakistan.” The results have yielded excellent dividends. Well Reputed national and International Organizations like Transparency International Pakistan, World Economic Forum, PILDAT, Mishal Pakistan have not only lauded NAB’s efforts for eradication of corruption but in the Gillani and Gallup Survey about 59 percent people have shown their confidence upon NAB. NAB under the dynamic leadership of Mr. Justice Javed Iqbal, has recovered a staggering sum of Rs. 490 billion from corrupt elements directly and indirectly from 2018 to 2020 that no one previously had ever been able to accomplish since the establishment of the anti-corruption watchdog in 1999. Besides the recovery NAB has filed 1269 corruption references in the various learned Accountability Courts which are under adjudication and their approximately worth is 750 billion. The overall conviction rate of NAB in Accountability courts is about 68.8 %.

The relentless efforts put in by Honorable Mr. Justice Javed Iqbal, Chairman NAB to eradicate widespread corruption has won him a national and international backing. People have started showing faith in NAB’s efforts and anti-corruption awareness has reached at all tiers of public level.  Not just in Pakistan alone, NAB has now emerged as a role model for countries under South Asian Association of Regional Cooperation (SAARC) which includes India, SriLanka, Bangladesh, Nepal and Bhutan. Under the courageous leadership of Mr. Justice Javed Iqbal, NAB heads SAARC anti-corruption forum. It is a focal organization for Pakistan under the United Convention against Corruption (UNCAC). NAB has also signed a unique Memorandum of Understanding (MOU) with China to extend cooperation in tackling corruption and to oversee CEPC projects being under process in Pakistan. Among other achievements of NAB, it has established a state of the Art Forensic Science Laboratory in NAB Rawalpindi besides establishing its own Pakistan Anti-Corruption Training Academy at NAB headquarters. The academy is meant to train and equip its investigation officers with modern techniques to investigate white collar crimes on the basis of lessons learnt in order to eradicate corruption. NAB has also signed Memorandum of understanding (MOU) with Higher Education Commission to spread awareness among students at Universities/Colleges level as part of Chairman’s vision to make our future leadership aware of the effects of corruption. It is a remarkable effort. In this regard, 55 thousands Character Building Societies (CBS) have been established in Universities/Colleges throughout the country. In order to streamline the working of NAB body, Chairman NAB has also ensured that a highest degree of transparency and merit is maintained at all levels of enforcement. From complaint verification to the final stage of filing a reference full level of transparency is maintained, guided, supervised and closely watched by the Honorable Mr. Justice Javed Iqbal, Chairman NAB and an innovative concept of combined investigation team has been introduced in order to benefit from collective wisdom and to improve the quality of investigation on the basis of solid evidence as per law.

The Honourable Mr. Justice Javed Iqbal, Chairman NAB always review, monitor and maintains a close liaison with all regional bureaus on regular basis to ensure there is no delay in completion of complaint verification, inquiries and investigations and diligent officers are firstly warned and then dealt according to law and no wrongdoings at any level of investigations is acceptable as NAB strongly believes in self accountability besides accountability of others. Honorable Mr. Justice Javed Iqbal’s spectacular achievements stem from his core belief that fighting corruption is a national duty that cannot be forsaken at any cost. Use of efficient Technology and prompt communication is a core requirement for achieving faster outputs and in this regard Chairman NAB has directed to computerize all major regional offices and upgraded the MES system.

Enforcement of the law and that too against bigwigs of the society comes at a cost, which often results in malicious propaganda against NAB but NAB always believes in working in accordance with law and is continuing to perform its duties without caring any pressure and threat. A core principle of NAB is respect for ensuring human values of dignity and respect of people visiting NAB. Honourable Mr. Justice Javed Iqbal Chairman NAB is matchless in maintaining the highest standards of ensuring the rights of the accused are well protected. NAB hopes that joint efforts of all stakeholders can materialize the dream of corruption free Pakistan into a reality. This is NAB’s faith and this is what NAB under the dynamic leadership of Mr. Justice Javed Iqbal, Chairman NAB stands for so that corrupt elements should be brought to justice as per law.

The politics of confrontation is a losing trade