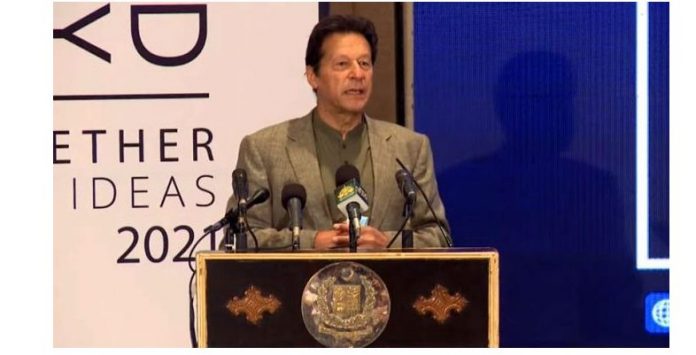 ISLAMABAD, MAR 23 (DNA) – Prime Minister Imran Khan on Tuesday said that Pakistan was unable to achieve its great potential owing to losing sight of Quaid-e-Azam’s vision, however, it has now been brought on track.

Taking to Twitter, the prime minister said that 15 centuries ago the Holy Prophet PBUH set up the first welfare state in Madina based on rule of law, meritocracy, compassion and tolerance; and where the quest for knowledge was made a sacred duty.

“In a couple of decades Muslims became the greatest civilization for the next few centuries,” he said while recalling Muslim history. He said that as soon as the Muslims moved away from these guiding principles, their civilization decayed and declined.

“81 years ago today our Quaid gave us the dream for Pakistan as envisioned by the great philosopher and poet Iqbal and based on these Riyasat-i-Madina principles,” he said. The prime minister said that so far they have been unable to achieve their great potential because of losing sight of Quaid’s vision.

“Today Pakistan is back on track to realise that ideal by bringing the powerful under rule of law [and] setting up a welfare state with our [programs] of Ehsaas, Panagahs and health cards,” he said while sharing the government initiatives to alleviate poverty in the country. = DNA