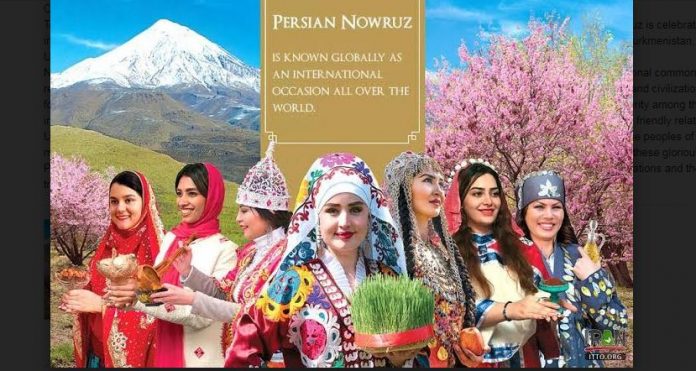 “As the world comes together to defeat COVID-19, Nowruz serves as an inspiration to recover and rebuild in a more just and durable way, in harmony with nature.”UN Secretary-General António Guterres message for 2021
“I congratulate all our dear compatriots, especially the respected families of martyrs and disabled war veterans, on Nowruz and the Persian New Year. I also congratulate all the nations that celebrate Nowruz.”

Ayatollah Ali Khamenei, The great leader of the Islamic Republic of Iran
Nowruz is the Iranian New Year also known as the Persian New Year which begins on the spring equinox, marking the first day of Farvardin, the first month of the Iranian solar calendar. It is celebrated worldwide by various ethno-linguistic groups. Nowruz falls on March 20 in 2021. Over 300 million people around the world celebrate the event of Nowruz which mainly live in the Greater Iran or Greater Persia i.e. the regions of West Asia, Central Asia, South Asia and Transcaucasia where Iranian culture has had significant influence and Iranian languages are spoken.

International Nowruz Day was proclaimed by the United Nations General Assembly, in its resolution A/RES/64/253 of 2010, at the initiative of several countries that share this holiday. Under the agenda item of “culture of peace”, the member states of Afghanistan, Azerbaijan, Albania, the Former Yugoslav Republic of Macedonia, Iran (Islamic Republic of), India, Kazakhstan, Kyrgyzstan, Tajikistan, Turkey and Turkmenistan prepared and introduced a draft resolution (A/64/L.30) entitled “International Day of Nowruz” to the ongoing 64th session of the General Assembly of the United Nations for its consideration and adoption.Nowruz has Iranian and Zoroastrian origins; however, it has been celebrated by diverse communities for over 3,000 years in Western Asia, Central Asia, the Caucasus, the Black Sea Basin, the Balkans, and South Asia.

Today, Nowruz is the beginning of the New Year not only in Iran but also in Afghanistan, and in some other countries Nowruz is celebrated as a cultural event  including Tajikistan, Russia, Kyrgyzstan, Kazakhstan, Syria, Georgia, the Republic of Azerbaijan, Albania, China, Turkey, Turkmenistan, India, Pakistan and Uzbekistan. In some countries Nowruz is an official holiday, and people in these countries rejoice with the onset of spring.Nowruz is not just the beginning of the new year of nature. Rather, it is an opportunity to preserve the cultural and civilizational commonalities of the nations of the region. The beautiful customs of Nowruz bring us together again.

Believing in the roots of this religion and that the culture and civilization of an ancient nation is formed by these rituals, and according to these rituals, borders, ethnicities, colour and race have lost their value and solidarity among the peoples of the world is increasing. Great rituals can be considered as one of the best factors for communication between nations and establishing friendly relations between countries. Undoubtedly, the victory and pride of every nation and peace of the world, and the freedom, happiness and prosperity of the peoples of the world have and have motives that we can seek those motives in the customs, rituals and legends left by nations of our region. Nowruz is one of these glorious rituals among nations. Preserving these customs and rituals, which are a joyful motivation, can be an effective step for communication between nations and the establishment of peace and tranquility in the world.