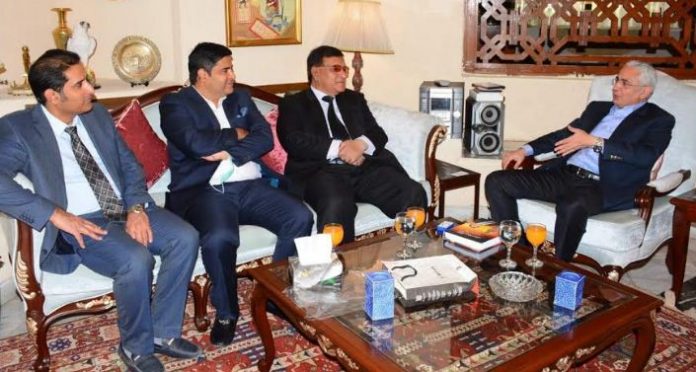 ISLAMABAD, MAR 16 (DNA) – The last visit of Foreign Minister of Pakistan Shah Mehmood Qureshi to Egypt was fruitful to enhance bilateral ties between the two countries.

There is a need for  more such visits to further expand cooperation .The Ambassador of Arab Republic  Egypt, Tarek Dahroug  expressed these views while a meeting with Chairman of Pakistan Cultural Forum Zafar Bakhtawari, Ahsan Bakhtawari and Waqar Bakhtawari at his residence in Egyptian embassy.

He further said that Gen. Nadim Raza the Chairman Joint Chief of Staff Committee would also visit Egypt this month to promote the defence cooperation between two countries.

Zafar Bakhtawari discussed the matter of mutual benefit and cooperation with Ambassador of Egypt including  the establishment of  Direct Airlink between Egypt and Pakistan.

Ambassador  hoped that  direct airlink would  enhance the relation between two countries including Tourism industry and Egyptian Airlink would start its working in Pakistan very soon.

Ahsan Bakhtawari & Waqar Bakhtawari showed keen interest to develop economic ties and further added that the Direct Airlink and more visits of  Businessmen would be benefitial to boost trade and investment opportunities.

Deputy Head of mission of Egypt and commercial counselor of Egypt embassy were also present at the meeting.=DNA