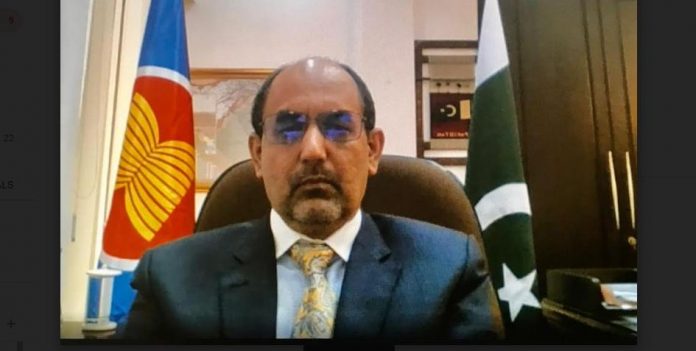 JAKARTA, MAR 9: Ambassador Muhammad Hassan presented his Letter of Accreditation as “Ambassador of Islamic Republic of Pakistan to ASEAN” to Dato Lim Jock Hoi, Secretary General of ASEAN. Due to Covid-19 pandemic, the credential ceremony was held virtually.

Appreciating the ASEAN’s role in addressing economic, security, political and social issues in the region, Ambassador Muhammad Hassan reiterated that Pakistan placed high importance to its association with ASEAN. Being a Sectoral Dialogue Partner of the organization since 1993, Pakistan was determined to extend its cooperation with ASEAN in all areas of mutual interest.

The Ambassador further noted that in line with its “Vision East Asia” policy, Pakistan was desirous of further expand its cooperation with ASEAN, and in this regard had requested for “Full Dialogue Partner” status with the organization. He hoped that Pakistan’s request would be favorably considered once the moratorium on new members was lifted.

On economic front, the Ambassador noted that Pakistan- ASEAN trade during 2020 was US$ 5.8 Billion, which was far below the existing potential. He underlined the need for both sides to further strengthen their economic and trade relations. In this regard, he said, Pakistan had a unique position as a connectivity hub between ASEAN and other regions. He invited ASEAN to extract maximum benefit out of this position, especially by joining development projects under China-Pakistan Economic Corridor. In this regard, he conveyed Pakistan’s full support to any such initiative.

The Secretary General, in his remarks, congratulated the Ambassador on presenting the credentials. He welcomed Pakistan’s commitment to strengthen ASEAN as its oldest Sectoral Dialogue Partner, and hoped that the relationship will be further strengthened in coming years.

He urged the need for the both sides to work together, identify more cooperation projects and take advantage of each other’s comparative advantages, especially in line with the ASEAN’s master Plan for Connectivity (MPAC-2025), and Pakistan’s CPEC initiative.

Pakistan was accorded the status of Sectoral Dialogue Partner (SDP) at the 26th ASEAN Ministerial Meeting on 23 July 1993. The Sectoral Dialogue Relations were institutionalized through the convening of the First Meeting of the ASEAN-Pakistan Joint Sectoral Cooperation Committee (APJSCC) on 5 February 1999 in Bali.

Following the Sixth AP-JSCC Meeting on 2 November 2017, ASEAN and Pakistan have adopted the updated Terms of Reference of the AP-JSCC and the ASEAN-Pakistan Sectoral Dialogue Partnership: Practical Cooperation Areas for 2019-2021, which serves as a practical guide to further substantiate the cooperation between both sides. The two sides have agreed to expand cooperation in a whole range of areas including Counter terrorism, Violent Extremism and Transnational Crimes, Economic cooperation, Food and Agriculture, Science and Technology, Information and Communication Technology, Tourism, Disaster Management, Culture, Human Resource Development, Connectivity, Narrowing Development Gap and initiative for ASEAN integration.