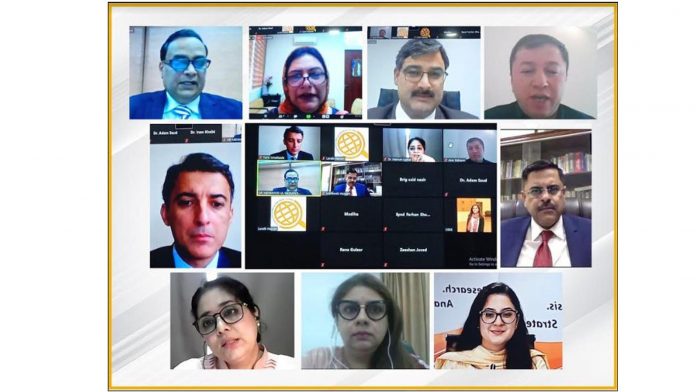 The conference aimed to discuss the possible ways and means to facilitate the process of reconstruction and mega infrastructural development in the liberated areas of Azerbaijan.

The conference was commenced with the opening remarks of Dr. FoziaHadi, Director, Regional Integration Center, University of the Punjab, Lahore. She highlighted that Pakistan has always supported Azerbaijan’s stance against Armenia, we are also the only country that does not recognize the state of Armenia.

She also extended Pakistan’s full support in the process of reconstruction of liberated areas and suggested joint research activities to connect the academia of Pakistan and Azerbaijan. She was of the view that academic linkages will play a great role in strengthening the bilateral ties of both countries.

Mr. FarizIsmailzade, Executive Vice-Rector, ADA University, Baku, Azerbaijan highlighted that during his visit to Pakistan, he firsthand witnessed the strategic importance of Pakistan and its potential in the region. Pakistan and Azerbaijan have cooperation’s in multiple fields like education, diplomacy, and think tank cooperation as well. Azerbaijan now wishes to establish enhanced economic ties with Pakistan. Furthermore, Azerbaijan and Pakistan can also collaborate in the fields of infrastructure development and defense as well.

He mentioned that during his various meetings in Pakistan, they tried to foster economic cooperation in business and the economy. Azerbaijan is ready to welcome companies from Pakistan for investment and to develop transport corridors and mutual investments in Azerbaijan.

Discussing the liberated areas of Nagoro-Karabakh he highlighted that these areas were under Armenian occupation and Armenia has destroyed the history and culture of these areas. He appreciates Pakistan’s constant support during the war with Armenia. Dr. Fariz also mentioned that the year 2020 was special for Azerbaijan and we hope that the years to come will open up new chapters of cooperation between Pakistan and Azerbaijan. He also shared few pictures from liberated areas of Nagorno-Karabakh and explained the destruction caused by Armenian forces.

During a one-and-a-half-month conflict, Azerbaijan has liberated several cities and nearly 300 illegal settlements and villages that were occupied by Armenia for the past three decades. He further highlighted that Armenia has disturbed the geography of this region for the past many decades by its illegal occupation of Azerbaijan lands.

The liberation of these lands was not an easy task but the performance, courage, strength,and bravery of the Azerbaijan Armed forces were exemplary in this regard. This war will be remembered in modern warfare history. He also highlighted that Azerbaijan was supported by the international community for its legitimate stance over the issue. He also mentioned that there is a dire need of reconstructing these areas and ensure their reintegration into the political and economic infrastructure of Azerbaijan. He suggested that it is very important that civil society, local support programs, and human rights organizations are involved in this process. Furthermore, it is important to keep in mindthe two fundamental sectors, one is the restoration of the infrastructure, and the second is economic rehabilitation. He extended his best wishes to the government and people of Azerbaijan for the successful reconstruction of the liberated areas.

Dr. Mehmood-Ul-Hassan Khan, Regional Geo-Political Analyst & Member Board of Experts, CGSS highlighted the atrocities committed by Armenia. He mentioned, that during the time of occupation Armenia deliberately destroyed cities and villages, all cultural and religious sites of Azerbaijan in the occupied territories were demolished. International media has documented the facts of deliberate destruction and desecration of the cultural and religious heritage of Azerbaijani people which requires reconstruction through regional reconnect.

Discussing the role of Pakistan and Azerbaijan cooperation, he highlighted that the government of Pakistan dispatched humanitarian aid to Azerbaijan. The assistance was intended for service members and other people working in the liberated territories. Furthermore, the government and people of Pakistan have always stood by Azerbaijan and we are ready to provide full support in reconstructing the liberated territories and returning IDPs to their homes. He also highlighted the importance of the Frontier Works Organization in reconstructing the newly liberated areas of Azerbaijan.

Prof. Dr. Iram Khalid, Chairperson of Political Science Department, University of Punjab, Lahorehighlighted that regional connectivity is gaining more and more importance.  Culture serves as a transmission belt to engage and understand cultures, norms, and practices. She emphasized that Pakistan and Azerbaijan share common cultural, historical, and religious values. The relationship between both countries is strong in the fields of diplomacy, economy, and political cooperation as well. She was of the view that now it is the time to further strengthen these bilateral ties by building people-to-people contact by arranging conferences, seminars, and other activities to bring closer the people and specifically the academia of both countries.

She highlighted that there is a need to improve the informal communication and efforts between both countries. During academic and formal discussions there ate many problems that can not be discussed. She was of the view that this online conference is a positive step in this regard.

Dr. Iram suggested that Pakistan can not only provide support to Azerbaijan in the infrastructural rehabilitation but also in symbolic cooperation that includes psychological and social support to the people of the liberated areas. She further suggested having follow-ups of all formal meetings to devise a practical strategy and work plan.

Dr. Adam Saud, Dean, Faculty of Humanities and Social Sciences of Bahria University, Islamabad highlighted that Armenia’s destruction and aggression have destroyed the cultural heritage and history of Azerbaijan. During the last three decades, this region was kept underdeveloped by the Armenia forces. They did not invest in any development of the occupied region. When the Armenian forces were retreating after they lost the war, they destroyed many religious sites and looted important artifacts.

Armenia demolished almost 700 buildings 927 libraries, 85 music and art schools, 22 museums, and 4 art galleries, all these buildings and facilitations were destroyed or abolished by the Armenian forces.

Discussing the reconstruction, he emphasized that to reconstruct the infrastructure, Azerbaijan has immediately started to take important steps. The people and government of Azerbaijan are committed to rebuild the community and restore peace in the areas. He also discussed the idea of smart cities and highlighted that the government has ensured safety to all citizens whether they are from Armenia or Azerbaijan.

Prof. AzerBabayev, ADA University, Baku, Azerbaijan that this occupation by Armenia is one of the longest occupations. He highlighted that Armenia has systematically done ethnic and cultural cleansing of the Azerbaijani people, their culture, and history.

Prof Azer further highlighted that Azerbaijan’s behavior in the international community is commendable as we have invited social, cultural, and political cooperation with the international community. He also emphasized that many Armenian people are living in Azerbaijan and the government has always taken care of them, as we have nothing against the people of Armenia. Furthermore, Azerbaijan does not believe in humiliating the enemies. The region of Nagorno-Karabakh holds special significance and it is a promising land for not only Azerbaijan but for the entire region.

She emphasized that after the liberation of these areas there exists an uncertainty in the region. Hence, the priority should be to regain and rebuild the trust between the people of these areas for a better social environment. She also mentioned that we need new methods of international cooperation between both countries. Untraditional methods need to be secured for regional reconstruction and connectivity.

Identifying certain areas, she emphasized the importance of cooperation in the field agricultural sector and the Tourism sector as Azerbaijan and Pakistan share many historical and cultural ties. Furthermore, educational cooperation is also very important to create linkages between the two countries.

The conference was concluded with the closing remarks of Dr. Mehmood-Ul-Hassan Khan, Regional Geo-Political Analyst & Member Board of Experts, CGSS. He extended his gratitude to all the speakers and stated that Azerbaijan’s victory against Armenia is historical. He also highlighted that during the Azerbaijan-Armenia war around 2783 soldiers and civilians were martyred.

The conference was moderated by Ms. Palwasha Nawaz, Project Executive, CGSS, and was attended by experts and analysts from Azerbaijan and Pakistan. The conference was also viewed live by 300 viewers on social media platforms.