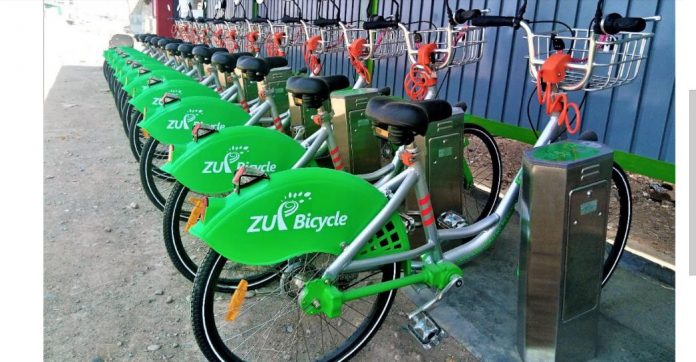 Islamabad, Mar 8 (DNA):  The government of Khyber Pakhtunkhwa (KP) Province is all set to launch the eco-friendly ‘Zu Bicycle Sharing System’ in Peshawar City on Wednesday.According to a report published by Gwadar Pro, Peshawar is the first city in Pakistan to adopt a Chinese-style bike-sharing system aiming to provide the urban residents with a cheaper, convenient and time-saving mode of transportation and to reduce energy consumption and harmful gas emission.

The Rs. 70 billion BRT project, launched in August 2020, is branded as “Zu Peshawar”, which in Pashto language means “Lets Go Peshawar”. A separate bike-lane is constructed along the 28-kilometer BRT corridor for the Zu Bicycle system.

“All preparations are made for the public launch of the cycle-sharing system,” TransPeshawar spokesperson Umair Khan told Gwadar pro, “360 bicycles have been delivered to the docking stations”.

The slogan of Zu Bicycle is “Clean and Healthy Peshawar”, which is also inscribed on the frames of the bicycles.

According to Umair Khan, the BRT had introduced hybrid buses and now it brings the bicycle-sharing system as a model for green travel that promotes green behaviours among the Peshawarities .

TransPeshawar has issued a code of conduct for Zu Bicycle riders as well as guidelines to help them find docking stations along the road. To rent and return the bicycle, riders can the same Zu fare card, which is also applicable to BRT buses.

The fares of using Zu Bicycles are nominal: it is free of cost for a ride up to 30 minutes while charging only Rs 20 per hour. Monthly pass holders can enjoy the ride for just Rs 10 per hour.

Initially, the TransPeshawar developed a network of 32 Zu Bicycle stations for Hayatabad and university campuses in Peshawar City.

“Next, the bicycle-sharing services will also be extended to other parts of the city,” Umair Khan told Gwadar pro.

All bicycles are imported from China, manufactured by the Easy-TRY Cycles Tianjin Company Ltd. With a one-size-fits-all design, the bicycles are gender neutral. According to Umair Khan, the step-through frame bicycles are designed for easy riding which are more appropriate as per the “cultural needs” of women in Peshawar.

Muhammad Ayaz, resident of Basharat Market Hayatabad, termed the launch of the cycle sharing system as a “positive initiative” by the KP government and said, “It is the easiest way to get around the city and explore new places”.

According to him, due to the constant increase in gasoline prices, fares are going up and bicycles are the only affordable alternative for locals.

Salma Anayat from University Town, Peshawar believes that the Zu Bicycle system could promote cycling culture in Peshawar. “Initially, females would be reluctant to use the bicycles due to cultural bearers; however, I hope that slowly and gradually, they will start riding bicycles,” she said.

“If I used to import one container of bicycles a year, now I import ten,” he told Gwadar pro. According to him, one of the main reasons behind the increase in demand for bicycles is “health benefits”. He mainly imports cycles from China, while some used cycles also come from European countries.

Dr. Aziz-Ur-Rahim Bacha has recently completed his Ph.D. from Fudan University Shanghai, China in the discipline of Environmental Science. According to him, the Zu Bicycle Sharing System will reduce air pollution and minimize pressure on fossil fuels.

Air pollutants from vehicles cause different health issues, increase the temperature and change atmospheric composition. According to the Air Pollution Index, Peshawar (on March 8) is the fourth most polluted city of Pakistan.

“The successful execution of the project can reduce haze and smog in Peshawar City,” Dr Aziz-Ur-Rahim told Gwadar pro.

According to him, China is known as a world leader in sharing bicycles with famous bicycle companies such as Ofo, Mobike, Hello-bike and Lime. Bicycle-sharing systems help China control emissions, relieve traffic congestion, and provide a cost-effective alternative for travel.

“Like China, Pakistan should also introduce a shared bicycle system in all its cities in order to reduce air pollution and greenhouse gas emissions,” he said.