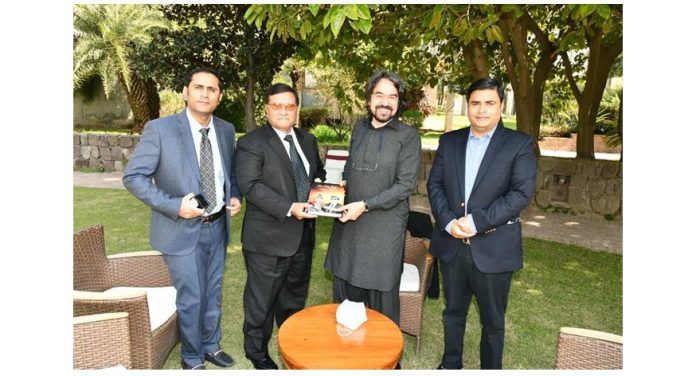 ISLAMABAD: There is a huge potential for cultural development between Turkey and Pakistan. These views were expressed by the Turkish Ambassador to Pakistan Ihsan Mustafa Yurdukal during a meeting with Pakistan Cultural Forum Chairman Zafar Bakhtawari, Ahsan Bakhtawari and Waqar Bakhtawari at turkish embassy.

Zafar Bakhtawari presented his newly published book ‘Jahan Dost’ to Turkish Ambassador . Turkish Ambassador said that at present there trade volume between two countries is 1 billion dollar which can be multiplied very easily through various means.

He further said that Turkish dramas have played an important role in introducing Turkish culture in Pakistan and bringing the two countries closer. Zafar Bakhtawari on the occasion briefed  him about the articles  written in his book about Pakistan and Turkey relations. He also called for the implementation of the Free Trade Agreement (FTA) between the two countries and the restoration of the cargo train between Pakistan, Iran and Turkey. He said there is a need to set up a joint forum to bring together the writers and intellectuals of both the countries regarding Allam Iqbal and Rumi ideology .

Waqar Bakhtawari said on the occasion that it takes 40 days for the imported goods to reach Pakistan from Turkey via sea route . The Turkish Ambassador said that after the cargo train, the goods will reach Pakistan in two days.

Ahsan Bakhtawari also stressed on the need to introduce Turkish food in Pakistan .