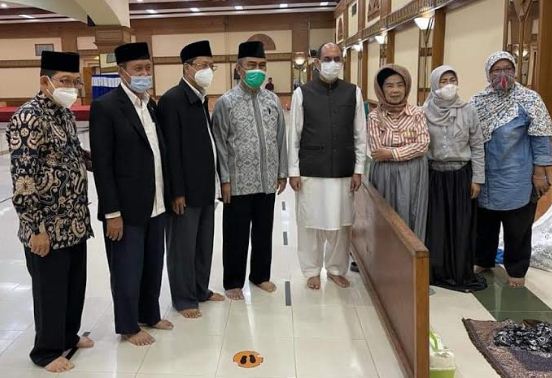 JAKARTA, FEB 19 (DNA) – Ambassador Muhammad Hassan, accompanied by the Deputy Head of Mission, Mr. Muhammad Faisal Fayyaz, visited Al-Azhar University, and the Al-Azhar Foundation in Jakarta today. At the university, the Ambassador was received by Professor Dr. Ir. Asep Saefuddin, the Rector of the University and a renowned academic.

Later on, the Ambassador visited the Al-Azhar Mosque, where he was received by Honorable Prof. Dr. Jimly Ashiddique, the chairman of the supervisory board of the Al Azhar Islamic Education Foundation (YPI Al Azhar), and Drs. Sobirin, Chairman of the Executive Board of the Foundation.

At the mosque, the Ambassador delivered a speech covering the current status of bilateral relations between Pakistan and Indonesia, especially in the fields of educational collaboration and Islamic affinity.

The Ambassador also touched upon the issues being faced by the Muslim Ummah today, including Islamophobia, Palestine, and Jammu & Kashmir dispute. He described in detail, the ongoing wave of intolerance and state sponsored repression against minorities (especially Muslims) in India with special reference to the plight of the Muslims of the Indian Illegally Occupied Jammu & Kashmir (IIOJK).

The Ambassador conveyed Pakistan’s strong rejection to the illegal actions of the Indian Government, of trying to bring the demographic changes in the area. He expressed firm resolve of the Government of Pakistan to support the case of Jammu & Kashmir at all forums. He also urged the Indonesian brothers and sisters to raise their voices against this injustice being done to the Kashmiri Muslims.

At the end, Ambassador Hassan appreciated the great service being done by the Al-Azhar Foundation Indonesia, in promoting education across the country and expressed desire to work together with the foundation in bringing the people of the two brotherly countries closer.

Al Azhar foundation is one of the biggest and the oldest organization in Indonesia, established in 1952. The organization has more than 200 institutions under its umbrella, from Kindergarten to High Schools and a University. The Embassy of Pakistan and Al-Azhar foundation have a history of close collaboration, and both sides are working to further enhance this partnership.=DNA