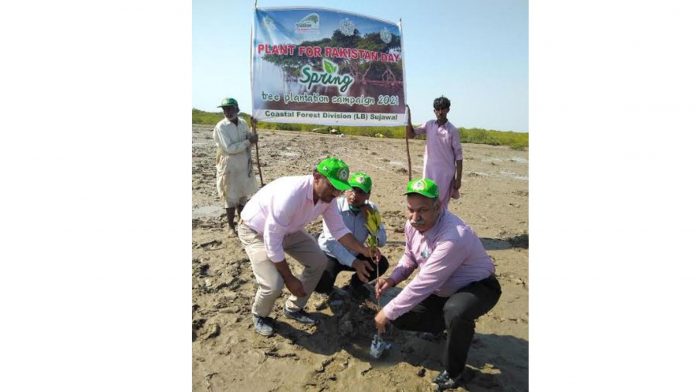 KARACHI: The Sindh Forest Department, Government of Sindh, organized an event at Shah Bander to dedicate an island to Tahir Qureshi – Baba-e-Mangroves (Father of Mangroves) in recognition of his services rendered towards conservation of mangroves along the Pakistan coast.  The event was attended by a large number of Forest Department officials, IUCN staff members, admirers and family members of Tahir Qureshi.

Tahir Qureshi, a forester by profession, having worked in Sindh Forest Department and then at IUCN, dedicated his entire life to the conservation of mangroves in Pakistan. He was later known as the ‘father of mangroves’. He passed away recently on December 29, 2020 in Karachi.

Speaking on the occasion, Mr. Riaz Ahmad Wagan, Chief Conservator Forest described Tahir Qureshi as a “true conservator who worked for conservation of mangroves as his religious duty. He was instrumental in planning millions of mangroves during his career.” He said that the Sindh Forest Department in recognition of his services for conserving the mangroves is dedicating a part of the Island as Tahir Qureshi Garden.He further said that the services of Tahir Qureshi will always be remembered. Tahir Qureshi’s commitment to conserving Pakistan’s mangroves will always be an example for others to follow who are engaged in the area of conservation.

Mr. Qureshi, presented the idea to the Government of Sindh to compete in the Guinness World Records by planting most mangroves in a day. He also takes the credit for data gathering of technical information for seven of the Ramsar Sites in 2000.Shahzad Sadiq, Divisional Forest Officer said that Tahir Qureshi is an excellent example for experts who are engaged in the field of conservation and sustainable development.

Mahmood Akthar Cheema, IUCN Country Representative said that Tahir Qureshi was a pioneering mangrove expert of Pakistan and had been engaged with their plantation since 1987 through numerous projects implemented by the Forest Department, and later through IUCN and other partners.He was also instrumental in expanding the mangroves forests from three to ten geographical locations along the coast of Balochistan.

He has been the driving force in re-introducing two mangroves species – Rhizophora mucronata and Aegiceras corniculatum – that had ceased to exist in this habitat.He also provided technical assistance in raising protective plantations as a first line of defense in Thailand and Sri Lanka after the devastating Tsunami of 2004.He also provided his expertise and services to Persian Gulf and Red Sea Mangrove Rehabilitation Projects in Saudi Arabia under UNDP-UNESCO, Regional Mangroves Project and Islamic Development Bank.

Qureshi authored several research papers including “Management Plan of Mangrove Forest in Indus Delta,” published jointly by the Government of Sindh and the Government of Pakistan. Also authored a chapter in the World Atlas of Mangroves – published by the (ISME) and (ITTO). Mahmood Akhtar Cheema further said that it is a due recognition by the Sindh Forest Department of the services rendered by Tahir Qureshi for the mangroves of this country.Family Members of Tahir Qureshi thanked Sindh Forest Department for dedication of Tahir Qureshi Park in recognition of his services.