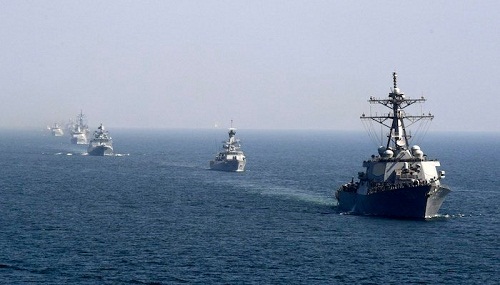 Karachi : Getting competing nations to partake in a military exercise is a mammoth task. But recently Pakistan proved the old dictum that “sea unites while land divides” by successfully organising the “Exercise Aman 2021”.

The week-long maritime exercise was conducted in the Arabian Sea off of Karachi. Forty-three countries sent their navies to the event, while a few nations also contributed their ships.

The diversity of the participants can be gauged by the fact that six out of seven continents were represented in the military drill.

Some participants, including the world’s largest navies, joined the drill to share their rich experience. Others became part of it sensing an opportunity to better equip themselves in the maritime domain.

Oceans are called highways of global economy, which is why this exercise was aimed at displaying a united resolve against terrorism, piracy, drugs, arms smuggling, human smuggling and other maritime crimes.

Since 2007, this biannual event has become a testament to project a soft image of Pakistan. But, this time, three major factors brought Pakistan to the global limelight and exponentially raised the stature of the Pakistan Navy in maritime diplomacy.

First and foremost, Pakistan’s ability to tackle the coronavirus pandemic ahead of the drill. This exercise comes at a moment when the whole world is still operating remotely. Even the US European Command had to modify the size and scope of its military exercise, Defender-Europe 20.

Yet, navies from across the globe showed their presence and made it memorable for all.

Second and equally important was the makeup of the participants. The military drill attracted competing countries like the US,  Russia, Japan and China as well as Iran and Saudi Arabia, to mention a few.

For the first time, the North Atlantic Treaty Organization (NATO) members joined Russia in a military exercise off of Karachi.

Which brings us to the question: has that policy of the NATO bloc changed? Not entirely.

The US, UK and other NATO members have only joined Aman-21 in an individual capacity. The current exercise has literally no comparison with the Bold Monarch 2011, where a Russian submarine was fully integrated in the NATO led drill. But since then, relations between NATO and Russia have only deteriorated.

Now that Joe Biden has come to power in the US, it is likely that the administration will be keeping a keen eye on Pakistan’s gradual drift towards China and Russia.

At the drill in Karachi, Pakistan’s closeness with Russia was very evident. Pakistan’s Chief of Naval Staff was also called on by Deputy Chief of Russian Navy HQ Rear Admiral Oleg V Apishev.

The Chinese side was led by a guided-missile destroyer “Guiyang” and the People’s Liberation Army’s Flotilla also included a guided-missile frigate “Zaozhuang” and a supplement ship “Dongpinghu”.

The Sino-US participation in Aman-21 comes at a time when tensions between Beijing and Washington are mounting over the South China Sea and Taiwan Strait.

Meanwhile, the Southern Fleet Commander, Commodore Ariya Shafghat Rodsari, headed the Iranian contingent. Since the tragic assassination of General Qassem Soleimani, the commander of Quds Force of the Islamic Revolutionary Guard Corps, it was the first time the US and Iranian military were attending a joint drill.

For Pakistan, the military drill was crucial as it ensures peace and stability in this strategically important maritime region. The foreign ship officials also acknowledged the efforts of Pakistan Navy in bringing global navies towards a shared commitment of maritime peace and lawful order at sea.

The event also gave a clear message to India that it simply cannot isolate Pakistan.