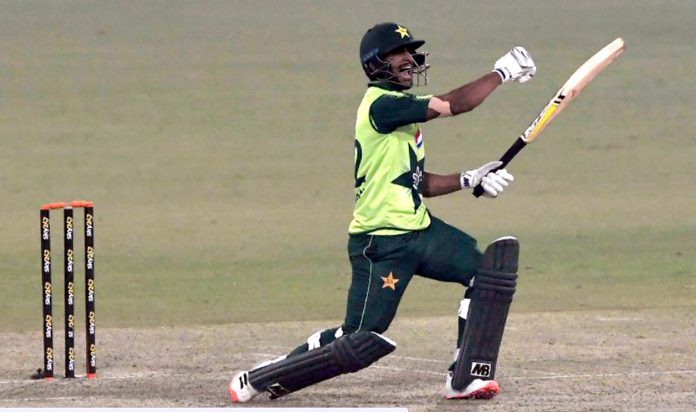 LAHORE, FEB 14: Pakistan won the third and final Twenty20 international against South Africa on Sunday with four wickets remaining, emerging victorious in the three-match series by 2-1.

Captain Babar Azam and opener Mohammad Rizwan picked up runs for Pakistan, scoring 44 and 42, respectively while Tabraiz Shamsi was the pick of the South African bowlers, taking four wickets.

Earlier, Pakistan won the toss and opted to bowl.

The win also makes Pakistan the first men’s team to reach a century of T20I wins.

Reeza Hendricks and Janneman Malan opened the innings for the visitors. South Africa suffered an early setback after Hendricks was bowled by Mohammad Nawaz in the second over.

The Proteas lost their second wicket soon after as Jon-Jon Smuts was caught out by Babar on Nawaz’s ball.

Just as it looked like South Africa was finding their footing after Pite van Biljon hit three boundaries off three balls, Hasan Ali got his revenge, bowling him out at the end of the over.

Zahid Mahmood, who made his international debut in today’s match, got his first wicket when Proteas captain Heinrich Klaasen was caught out by Usman Qadir off Mahmood’s ball.

He claimed his second wicket on the very next ball when Malan was ruled out lbw.

The quick loss of wickets continued with Andile Phehlukwayo getting caught out on duck off leg-spinner Usman Qadir’s ball.

Zahid claimed his third wicket in the 11th over, bowling out Dwaine Pretorius, the star of yesterday’s match.

The wickets continued falling with Hasan bowling out Bjorn Fortuin in the 16th over.

David Miller scored much-needed runs for the visitors after wickets fell in quick succession, hitting several boundaries to pick up 85 runs from 45 balls.

Rizwan and Haider Ali opened the innings for the home side. Rizwan, who top-scored for Pakistan in both the earlier T20Is, hit multiple boundaries in the opening overs.

Pakistan lost their first wicket in the seventh over as Haider was bowled out by Shamsi.

Rizwan’s wicket too fell to Shamsi who bowled him out in the ninth over. The hosts lost their third wicket to the left-arm spin bowler as well when we bowled out Hussain Talat.

Babar, who underperformed in the last two matches, returning to the pavilion in the early overs, hit several fours today to drive up Pakistan’s score.

But he was bowled in the 14th over by Pretorius.

In what turned out to be yet another remarkable performance, Shamsi collected his fourth wicket in the 15th over when Asif Ali was caught out by David Miller off his ball.

Faheem Ashraf was caught out by Miller off Bjorn Fortuin’s ball.

With the series locked at one-all, Pakistan had brought in leg-spinner Zahid Mahmood for his international debut.

Pakistan won the first match by three runs while South Africa took the second by six wickets, both in Lahore.