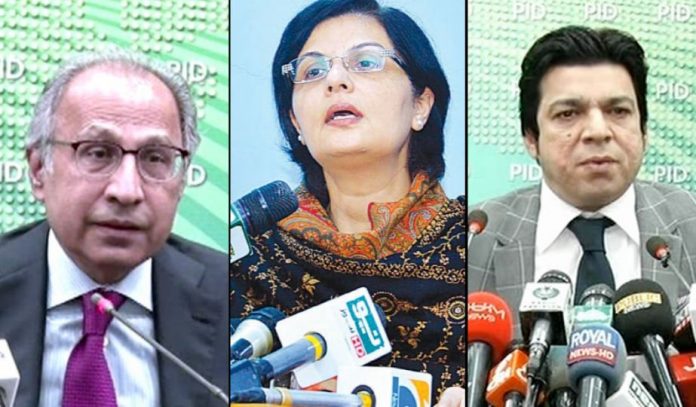 ISLAMABAD, FEB 12 – The ruling Pakistan Tehreek-i-Insaf (PTI) has finalised the names of most of its nominees for the upcoming Senate election, Minister for Science and Technology Fawad Chaudhry said on Friday.

The list of candidates also includes Finance Minister Dr Abdul Hafeez Shaikh — who will contest for a seat from Islamabad — and Special Assistant to the Prime Minister on Poverty Alleviation Dr Sania Nishtar, one of the nominees from Khyber Pakhtunkhwa.

Shaikh, who is not a member of Parliament, was previously an adviser to the premier on finance and was appointed as finance minister in December last year. However, as per Article 91 (9) of the Constitution, he cannot remain a minister for more than six months until he is elected to one of the houses. Thus he must be elected to the Senate this time around in order to continue as the finance minister after June.

Nishtar, who is part of the PM’s cabinet as a special assistant, is also not a member of Parliament and therefore ineligible to hold the position of a minister.

Faisal Vawda, the federal minister for water resources, is also amongst the list of nominees. He will be contesting on a seat allocated for Sindh, Chaudhry said.

Here is a complete list of the nominated candidates who have been announced so far, and the seats they will be contesting for:

The Senate elections will held on March 3, according to a notification from the Election Commission of Pakistan. Candidates for the polls are to file their nomination papers with the returning officer between February 12-13.

The Senate polls will take place in a highly charged political climate, with the opposition parties vowing to overthrow the government while the ruling PTI push for electoral reforms that would enable show of hands during the upper house’s ballots.

As many as 52 senators are set to retire — 50 per cent of the 104-member house — on March 11 after completing their six-year tenure. However, this time there will be no polling for the four seats of the erstwhile Federally Administered Tribal Areas (Fata) after its merger with the Khyber Pakhtunkhwa province.

Therefore, polling will be held to elect 48 senators — 12 each from KP and Balochistan, 11 each from Punjab and Sindh and two from Islamabad. Polling will be held to elect seven members on general seats, two women and two technocrats in the four provinces. Besides this, the election on one minority seat each in KP and Balochistan will also be conducted.

The ruling party is set to become the single largest party in the Senate after the upcoming elections, but it will certainly not be able to gain control of the upper house of the Parliament and will still have to rely on its allies and opposition parties even for carrying out simple legislation.