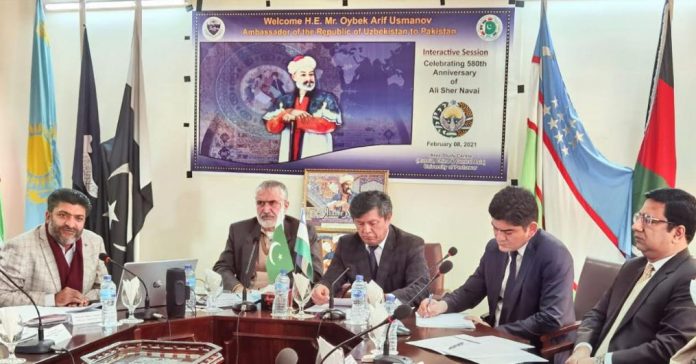 ISLAMABAD: AybekArif Usmanov, Ambassador of the Republic of Uzbekistan to Pakistan has stated that February 9th is the birthday of Alisher Navoi, the glorious son of the Uzbek nation.

He was the first outstanding poet who discovered the remarkable world of the Uzbek language and its richness. He further stated that his creativity is famous throughout the world and his contributions in philosophy and literature are commendable.

It may be mentioned here that  an interactive session titled, “Celebrating 580th Anniversary of Alisher Navai” was jointly organized by Area Study Center (Russia, China & Central Asia), University of Peshawar and Center for Global & Strategic Studies (CGSS), Islamabad. The Chief Guest for the event was His Excellency AybekArif Usmanov, Ambassador of the Republic of Uzbekistan to Pakistan.

Prof. Dr. Shabbir Ahmed, Director, Area Study Center (Russia, China, and Central Asia), University of Peshawar presented the welcome address. He mentioned his close affiliation with the Republic of Uzbekistan and welcomed cooperation in various avenues with the Embassy of Uzbekistan to Pakistan.

Prof. Dr. Muhammad Abid, Pro-Vice-Chancellor, University of Peshawar expressed his gratitude to His Excellency for gracing the interactive session with his presence and stated that we are grateful to the Embassy of Uzbekistan to Pakistan for establishing the Alisher Navai Center at the Area Study Center (Russia, China & Central Asia), University of Peshawar. Moreover, he mentioned that this center will engage in enhancing the bilateral relations between Uzbekistan and Pakistan.

Mr. Khalid Taimur Akram, Executive Director, CGSS in his address stated that Pakistan and Uzbekistan governments are taking remarkable steps to enhance and strengthen regional connectivity. He also highlighted that Uzbekistan is playing an important role in the Afghan peace process.

The interactive session was attended by 50 participants including faculty members of the University of Peshawar and students of International Relations and related fields as well.