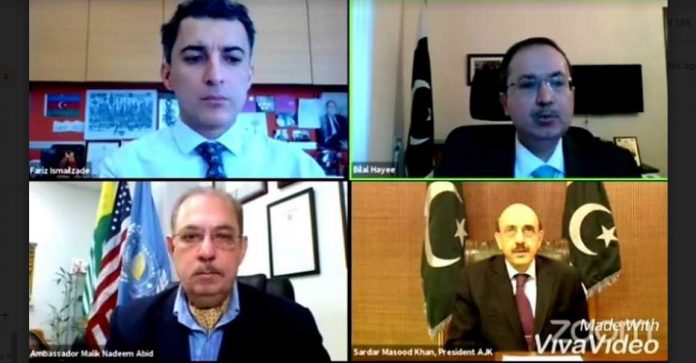 ISLAMABAD, FEB 2 (DNA) – A webinar titled “Kashmir: An Unfinished Agenda” was hosted by the Embassy of Pakistan on 1st February 2021. The President of Azad Jammu and Kashmir Sardar Masood Khan, and Member of Milli Majlis (Azerbaijan’s Parliament) and Chair of Pakistan-Azerbaijan Parliamentary Friendship Group from Azerbaijan side, Ms. Ganira Pashayeva were the keynote speakers.

During the webinar, video messages prepared by the Azerbaijani youth expressing solidarity with the people of Indian Illegally Occupied Jammu and Kashmir (IIOJ&K) were also shown.

This collage comprising the self-made videos by the Azerbaijan youth sent a clear and unequivocal signal of Azerbaijan’s support to the just cause of Kashmir.

In his emphatic statement,Sardar Masood Khan talked about the historical, geographical, cultural and commercial linkages of Jammu and Kashmir with Pakistan. He argued that India occupied the territory through deceit and repression. On 5 August 2019, India reoccupied the territory and did all it could to suppress the Kashmiri people.

Malik Nadeem Abid highlighted the atrocities committed by the Indian occupation forces in Kashmir and equated Indian actions in Kashmir to genocide.He proposed that the UN Secretary General should nominate plebiscite administrator for Jammu and Kashmir as per the UNSC resolutions.

Ms. Mullickin her recorded message stated that Kashmir had been turned into a largest prison in the world where torture, arbitrary confinement, and rape was used as a weapon. He appealed to the international community to raise voice against the injustices committed in Kashmir by the Indian forces.

Member of Parliament Ms. Pashayeva noted that Azerbaijan and Pakistan had a number of similarities and common interests. Our challenges were also similar. She stressed that Justice for Kashmir and restoration of Peace in the region was among the greatest desires of Azerbaijan. Ms. Pashayeva added that Azerbaijan would continue to support Pakistan’s rightful position in resolving the Kashmir dispute.

Ambassador Bilal Hayee moderated the event and made introductory remarks highlighting the current situation in the IIOJ&K. The event was live streamed from the Embassy’s official Facebook page.=DNA