ISLAMABAD, DEC 15 (DNA) : Pakistan is one of the biggest democracies in the region therefore Uzbekistan would like to benefit from Pakistan’s experiences as part of Tashkent’s desire to strengthen friendly and brotherly relations with Islamabad.

Ambassador of Uzbekistan Furqat Sidikov expressed these views while speaking during a reception he hosted for the Pakistani delegation heading to Uzbekistan for observing the upcoming parliamentary and local govt elections.

Ambassador Furqat Sidikov also briefed the members of the delegation about various dimensions and dynamics of the elections.

The delegation comprises members of National Assembly, Senate of Pakistan, academicians, media persons and think-thank. During the week-long trip, the delegation will be taken to various polling stations. One-on-one meetings have also been arranged for the members of the delegation.

Ambassador Furqat further said, his country greatly valued relations with Pakistan adding both countries have come closer to each other in past few years.

He said Uzbekistan had invited Prime Minister Imran Khan to visit Tashkent adding the visit would, for sure, further boost bilateral relations. The ambassador also hinted at a visit of Uzbek leadership to Pakistan in the near future.

While briefing about the elections, the ambassador told as many as five political parties were taking part in the election. He said this time two million newly-registered voters mainly comprising youth of Uzbekistan, would play a key role in the elections. 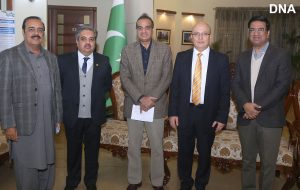 Likewise, he said each party has fixed over 30 percent women quota for the upcoming elections, which means the next parliament shall have a sizeable number of women MPs also.

He said incumbent government spearheaded by visionary President Shavkat Mirziyoyev strongly believes in welfare of ordinary people. The government sincerely wants to do something for the common people, that is why a number of measures have been introduced towards this end including democratic reforms.

Elections for regional, city and district councils will be held on the same day. The Senate will be formed following the elections for the legislative chamber. The last parliamentary elections were held in 2014.

The participants were informed about the fundamental reforms being carried out in Uzbekistan as part of the Strategy for Action on the five priority areas of the development of the republic in 2017-2021, including ensuring the political rights of citizens. The main attention was paid to the upcoming elections to the Oliy Majlis and local councils of our country.

He said in accordance with Article 117 of the Constitution of the Republic of Uzbekistan, nationwide elections to the Oliy Majlis of the country will be held on the first Sunday of the third decade of December of the current year – this date falls on 22 December.

According to the Central Election Commission, more than 20 million citizens of our country with the right to vote will be able to vote, more than 2 million will take part in the vote for the first time.

He further said the new parliament is expected to carry forward the reform agenda of the President of Uzbekistan with a view to providing better facilities to people of the country.

To a question the ambassador told that the voting in Uzbekistan was mandatory and everybody has to cast vote. That is the reason the voters turnout is always very high i.e. over 95 per cent or so.

Replying to a question about any educational qualifications for the candidates the ambassador told by and large highly educated people stand as candidates. Since literacy rate in Uzbekistan is very high therefore voters exactly know who they should vote for and people prefer very well educated people to represent them in the parliament.

Ambassador Furqat further said this time a good number of business people is also contesting the elections, which is a significant development because MPs having adequate knowledge of economy can contribute greatly towards an economically stable and strong Uzbekistan.

The ambassador said an election monitoring cell has also been established in the Embassy of Uzbekistan in Islamabad. Uzbek nationals living in Pakistan shall be able to cast their votes.

In case any voter was not able to come to Islamabad, the ballot box shall be taken to the doorstep of the respective voter no matter how far he or she is living from Islamabad, the ambassador told.

The embassy, he said, had made elaborate arrangements for the Election Day including food for voters and their families; fun gala etc so as to provide them a homely environment.=DNA