BY A M BHATTI

ISLAMABAD, DEC 4 (DNA)  Federal Minister for Aviation Ghulam Sarwar has said hearts of all Pakistanis throb with their Palestinian brothers and sisters adding Pakistan strongly condemns Israeli occupation of Palestinian territories and persecution of innocent people.The minister expressed these views while speaking as chief guest on the occasion of Day of Solidarity with Palestinian people and 31st anniversary of declaration of Palestinian state. 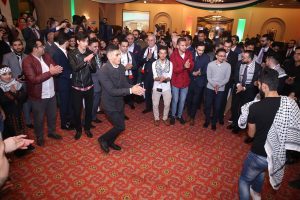 Minister Ghulam Sarwar further said Pakistan and Palestinian Authority have a very close and political relationship. He said that Pakistan firmly remains committed to ‘Two State Solution’ of the Palestine.

The minister said there are many Palestinians in Pakistan seeking education in various universities and institutions across the country such as Karachi, Lahore, Hyderabad, Quetta and Multan. Settled families on the other hand, are primarily based in Islamabad and Karachi, he added.

He said relations between two countries are from cordial to excellent and growing with the each passing day.

He assured that Pakistan will continue supporting the cause of Palestine through thick and thin.

Earlier Ambassador of Palestine Ahmed Rabei thanked the guests for attending the reception in large numbers.

He also read out message of President of State of Palestine Mahmoud Abbas in which the President said time has come for the emancipation of the Palestinian people and their freedom from this injustice, oppression and occupation.