ISLAMABAD, NOV 30 (DNA) –Ambassador Romania Nicolae Goia has said Romania is eager to work with friendly Pakistan for taking forward the bilateral agenda, as well the cooperation within the EU-Pakistan framework and in multilateral formats, especially in the UN.

“I warmly welcome the spirit of Romania-Pakistan relations, characterized by friendship and collaboration and the new dynamism witnessed in the recent years with a result driven political dialogue reflecting a clear desire of both states for developing a pragmatic relationship in fields of mutual interests”.

The Romanian ambassador expressed these views while speaking on the occasion of 101 anniversary of National Day of Romania.

Apart from him, Minister Sheharyar Afridi attended the event as guest of honour while a number of other Federal and State Ministers, Senators and ex Ministers also attended the Romanian national day reception.

The ambassador further said, he will not go into details of the numerous projects they have initiated in cooperation with Pakistan but I would certainly mention the two patrol boats built in Damen Galati, a Romanian shipyard, for the Pakistani navy with very good prospects that a contract for two more boats will be signed very soon.

The year 2019 marks the celebration of 55 years of the bilateral relations between Romania and the Islamic Republic of Pakistan, characterized by friendship, mutual interest and collaboration. In recent years, the relations witnessed new dynamics, with a result-oriented driven political dialogue and positive developments in the economic/commercial, educational and cultural fields.

“In the economic realm, we praise the recent dynamics of bilateral economic cooperation with the IR of Pakistan, which has significantly diversified, in fields like shipbuilding, aeronautics and transport, and increased up to 13,74% as compared to 2017. Over a five-year period, 2013-2018, the bilateral trade balance was positive for Romania with a steady increase in percentage terms, a bilateral format we share interest to further enhance and diversify. During the last 5 years or so, regular exchanges between the Romanian and Pakistani Chambers of Commerce have been taking place, stimulating business to business and people to people contacts”.

While talking about the cultural cooperation the ambassador said, at a cultural level, Romania benefits of a good reputation and experiences fruitful relations with IR of Pakistan.

To give one example, in Islamabad, there is a monument dedicated to the national poets Mihai Eminescu and Alama Iqbal. The six meter long marble, bronze and granite monument, located in Blue Area on one of the most important boulevards in the capital of Pakistan, features Pakistani architectural elements and a representation of the Infinite Column, the masterpiece of the Romanian sculptor Constantin Brancusi.

The political-diplomatic dialogue is ensured by the Ministries of Foreign Affairs, which in the last years was regularly facilitated at the State Secretary level.

He said, regarding the educational bilateral format, a Memorandum of Understanding for cooperation between Kamra PAC and the Polytechnic University of Bucharest was signed in 2017 and is valid for 5 years.

“In the cultural domain, the two states periodically conclude cultural agreements and agree on Executive Programs to implement, making possible that approximately 200 students are enrolled in Romanian Universities, especially Medicine and Economics”.

With regards to people to people contacts, the Ambassador said,  in order to bring together business and civil society representatives, graduates of higher educations, former ambassadors, diplomats, retired officers established a Pakistan – Romania Friendship Association, and a group called Friends of Romania was created in Lahore.

Pakistan-Romania Business Council is also an institution created to boost economic bilateral relations. Romania has also Honorary Consulates in Sindh, Punjab and KP which are fully functional and have an important contribution to the overall development of the Romanian- Pakistani relationship, he added. 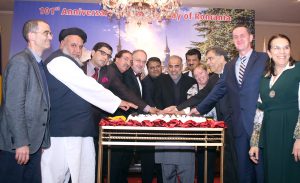 The ambassador quoted Shah MAHMOUD Qureshi, the foreign minister of Pakistan, who said in an interview given to a Romanian reputed magazine: “Pakistan-Romania relations established since 1964, are marked by stability and cordiality. The robustness of this relationship picked up pace in the very early stages of our bilateral relations”….

Talking about Romanian, EU relations, he said, since it’s joining European Union in 2007, Romania’s relations with Pakistan have continued with renewed synergies.

We are now working on supplementing our bilateral relations with new dimensions and on a larger scale.

While our high level political interactions have continued to evolve over these years unabated, we are now transforming our relations into a multifaceted and long-term partnership through mutual collaboration in such domains as trade, defence, education & science, culture, people-to-people contacts, tourism etc.”

“On 1st of December 2019 we celebrate the 101 years since the realization of our Great Union. One hundred and one years back, the century long ideal of national unity has been achieved, building the foundation of the modern Romanian state”.

The anniversary   of the Great Union has given us the opportunity to honour the memory of the sacrifices made for laying the foundation of new Romania which ultimately placed us in the midst of great European family, he added.=DNA