Istanbul Airport has won the “Airport of the Year” award in the “Readers’ Choice 2019” awards, organized by the International Airport Review.

ISTANBUL, NOV 7 (DNA) -Istanbul Airport outdid its rivals to receive the “Readers’ Choice: Airport of the Year” award, which is awarded to the company with the most reader votes and organized by one of the world’s most prestigious publications, the International Airport Review.

Having recently completed its first year of operation, Istanbul Airport earned the approval of international authorities to become a global hub. This was thanks to the “Airport of the Year” award, which is awarded by the prestigious UK-based publication, the International Airport Review. 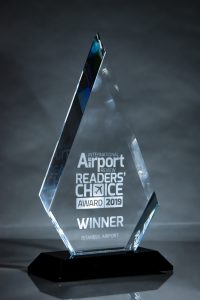 Upon underlining Istanbul Airport’s receipt of the award and achieving the impossible in a short time, Kadri Samsunlu, Chief Executive Officer of İGA Airport Operationssaid:“We are thrilled to bring an international award to our country.With a year full of Istanbul Airport’s unique architecture, strong infrastructure, state-of-the-art technology and superior passenger experience, we’ve made enormous strides in turning the airport into a global hub and advancing the Turkish civil aviation industry to higher levels by creating an exemplary operation model.

The Airport of the Year award, which we received by outperforming some of the most prestigious airports, signifies our exceptional performance at Istanbul Airport. In light of the pride we’ve brought our country and the example we’ve set, we want to bring more international prizes to Turkey by achieving our targets.”

The publication reaches 30,000 readers worldwide with its in-depth analyses, news, articles, interviews and case studies on airports and airlines. =DNA