ISLAMABAD, AUG 21 (DNA) – As Pakistan Tehreek-e-Insaf (PTI)-led federal government has undertaken a fascinating initiative of ‘Clean and Green Pakistan’ for combating climate change and its adverse impacts on the environment and health, the German Embassy in Islamabad distributed cloth bags among people and students as an alternative to polythene shopping bags.Since August 14, under the Clean and Green Pakistan campaign, polythene bags, plastic bottles, and wrappers for carrying food items have been completely banned in Islamabad.

The official Twitter account of the Embassy on Tuesday posted multiple pictures of the staff being welcomed by citizens at different locations in the federal capital. 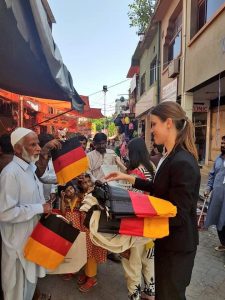 “After ban of plastic bags entered into force in #Islamabad, we distributed cloth bags today at a Government school, Aabpara market & Blue Area. Important to raise people’s awareness to #avoidPlastic for the sake of our environment! #Reuse is the only solution,” stated a tweet by the German Embassy.

On the other hand, the Ministry of Environment has constituted special teams to conduct raids on a daily basis and confiscate polythene bags in the capital city.

About 2.5 million polythene bags were seized by the teams as part of the crackdown.

The ban on the use of polythene bags in the federal capital entails a permanent halt of its manufacturing, trading and sale. The Ministry of Climate Change has introduced alternate cotton bags in the place of plastic bags.

The Sindh government has also announced plans to make the province a plastic bag-free by October 2019.

Punjab Chief Minister Usman Buzdar also asserted that the approval to ban plastic bags in the province would be accorded in the next meeting of the provincial cabinet.=DNA