BEIJING — A popular news anchor watched by hundreds of millions of Chinese poured scorn on the United States, using an obscenity to accuse it of sowing chaos. A prominent official blamed Washington directly for the antigovernment protests upending Hong Kong.Pointed hostility toward America, voiced by Chinese officials and state-run news organizations under the control of an all-powerful propaganda department, has escalated in recent weeks in tandem with two of China’s big problems: a slowing economy complicated by trade tensions and turbulence in Hong Kong that has no end in sight.“It is, after all, the work of the United States,” Hua Chunying, spokeswoman for the Ministry of Foreign Affairs, said this week of the unrest in Hong Kong.

Like other Chinese officials, she presented no evidence of American involvement in the demonstrations, which stem from worries over Beijing’s encroaching influence in the semiautonomous region.

This is hardly the first time China has responded to domestic problems with frontal assaults on outsiders. Thirty years ago, Washington was accused of fomenting the pro-democracy upheavals on Tiananmen Square.

But after decades of working together on economic, technological and even military matters, China and the United States are going through a breakdown in relations that has turned increasingly adversarial.

Now, a dramatic singling out of the United States as a bad actor is setting a new anti-American tone for a domestic audience that is worried about jobs and sees Hong Kong as an island of ungrateful citizens.

This is deliberate on the part of the Chinese government, analysts said.

“Hong Kong is part of the bigger playbook to blame the United States for everything,” said Ho-fung Hung, a professor of international relations at Johns Hopkins University. “The Chinese government knows the Trump administration is not popular in the United States or in China, so it’s an easy scapegoat.”

[Meet the Trump-taunting editor at China’s “Fox News” who is a key voice in the trade war.]

After trade talks with the United States broke down in May, China was relatively polite toward Washington as the two sides considered their next steps. When Hong Kong protesters began marching regularly in June, drawing crowds that organizers estimated at up to two million, the Chinese state news media made scant mention of it.

But now the gloves are off, with American and Chinese negotiators making little progress at talks in Shanghai this week. Just on Thursday, President Trump escalated the trade war, saying he would impose tariffs on an additional $300 billion worth of Chinese imports.

Beijing also does not appear to see an end to its differences with Washington over the Chinese telecommunications giant Huawei, which was blacklisted by the Trump administration as a security threat.

As the economic strains intensify, state news outlets are now depicting the demonstrations in Hong Kong as the work of Americans and other “foreign forces.”

In fact, Mr. Trump expressed respect for China’s sovereignty on Thursday, calling the protests “riots” when asked by reporters about the unrest. “Hong Kong is a part of China, they’ll have to deal with that themselves,” he said. “They don’t need advice.”

One of the most remarkable anti-American eruptions came last week when Kang Hui, one of China’s most recognized television news anchors, attacked the United States on-air as a hegemon that bullied and threatened others.

“They stir up more troubles and crave the whole world to be in chaos, acting like a shit-stirring stick,” Mr. Kang said on the usually stolid 7 p.m. national news program on CCTV, China’s state broadcaster. The expletive quickly became one of the most-searched-for phrases on Chinese social media.

In a follow-up video on a CCTV social media account, Mr. Kang boasted about how he had taunted the United States. 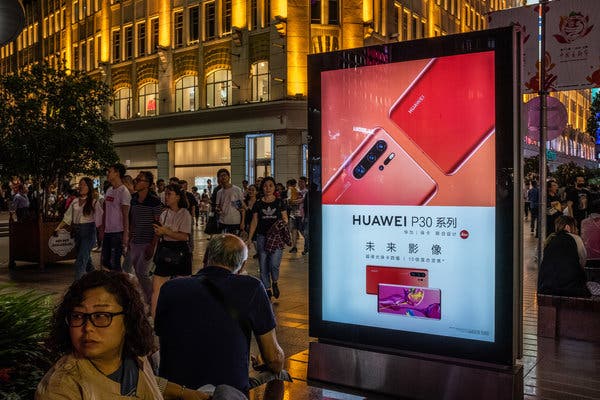 China began dialing up the anti-American comments after a meeting in Washington last month between Secretary of State Mike Pompeo and Jimmy Lai, the publisher of Apple Daily, a pro-democracy newspaper in Hong Kong. A statement from the Chinese Foreign Ministry accused senior United States officials of having “ulterior motives.”

At the same time, prominent Chinese figures have become more public in their criticism of the Hong Kong protests, and more outlandish in their claims.

One professor accused the United States of encouraging pregnant women to appear at hot spots during demonstrations, as a tactic to confuse the police.

“They are obviously actors, not Hong Kong citizens,” said Wang Yiwei, a professor in the School of International Studies at Renmin University in Beijing.

In recent days, the barbed language has turned to the United States economy as well.

Ms. Hua, the Foreign Ministry spokeswoman, said at a briefing on Wednesday that the Chinese economy was in a far stronger position because it grew 6.2 percent in the second quarter, compared with 2.1 percent growth for the United States.

“Which one is better, 6.2 percent or 2.1 percent? I believe you all have a clear judgment,” she told a room full of Chinese and foreign reporters.

While the United States figure is far short of Mr. Trump’s 3 percent target, economic growth in China — which reported double-digit growth as recently as 2010 — is at a 27-year low.

CCTV is now regularly showing video of clashes between protesters and the police that suggest Hong Kong is in the throes of permanent rebellion. Chinese-backed news outlets in Hong Kong have published photographs of foreigners taken at or near the protests, including journalists, and accused them of being American government agents.

Beyond the specific issues of Hong Kong and trade, Mr. Pei said, the Chinese government is trying to construct a “meganarrative” that portrays the United States as the “principal antagonist intent on not only thwarting China’s rise with the trade war but also fomenting trouble within Chinese borders.”

Media experts said that while the government rhetoric was probably effective in influencing the attitudes of Chinese people toward the United States, its precise impact was impossible to measure.

Since Hong Kong’s last sustained protest movement in 2014, the experts said, Beijing has become more sophisticated at controlling information from outside sources.

“Domestic platforms are heavily censored,” said Luwei Rose Luqiu, an assistant professor in the journalism department at Hong Kong Baptist University. “Only posts and comments in line with official ideology and rhetoric are allowed to exist.”

The propaganda machine has a powerful insulating effect on Chinese readers and viewers, said Lokman Tsui, an assistant professor in the school of journalism at the Chinese University of Hong Kong.

“Even when some Chinese people come across messaging that is contrary to the propaganda, they are inoculated enough to ‘resist’ these messages,” Mr. Tsui said.