WASHINGTON (DNA) – Prime Minister (PM) Imran Khan on Sunday has met US investors delegation led by effective member of Democratic Party and famed trader Javed Anwar in Washington DC.During the meeting, the premier invited US businessmen and investors to benefit from the economic and business opportunities afforded by Pakistan’s strategic location. 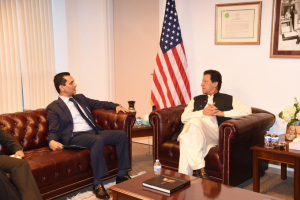 The US businessmen appreciated improved security environment in Pakistan and identified areas of interest with regard to investment in key sectors including energy and tourism.

Earlier, Prime Minister Imran Khan had arrived in Washington to hold talks with President Donald Trump on cementing Pakistan-U.S. relations in a range of areas. 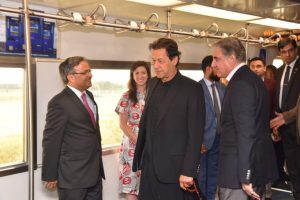 PM was received by Senior Officials of US State Department, Foreign Minister Shah Mahmood Qureshi and Ambassador of Pakistan to US Dr. Asad M. Khan while enthusiastic Pakistani-American community members were also gathered on the occasion.

Meeting between the PM and US President Donald Trump is scheduled to be held at White House on July 22.