ISLAMABAD, JUNE 18 (DNA) – Ambassador of Egypt Ahmed Fadel Yacoub has said his country greatly values its relations with Pakistan and looks forward to give new dimensions to these relations.Ambassador Fadel expressed these views during a reception he hosted for the newly-appointed High Commissioner of Pakistan to Singapore Ms. Rukhsana Afzaal, Director General Middle East, Ministry of Foreign Affairs. 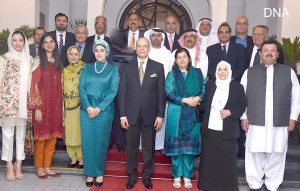 He noted with satisfaction that during last couple of years Egypt, Pakistan relations have seen marked improvement with a clear intention on both sides to further promote and develop these relations.

Since then both countries have been involved in exchange of delegations, he added.

The ambassador said both countries will have a joint ministerial meeting also that would surely augment efforts of leaders of both sides to further strengthen political relations.

He particularly thanked Ambassador Rukshsana for her whole hearted support to bring bilateral relations back on track.

Ms. Rukhsana Afzaal in her brief remarks thanked the ambassador for hosting the reception and providing her with a chance of interacting with her friends especially from the diplomatic corps.

She hoped that both Pakistan and Egypt would be able to find more common grounds in order to further diversify and cement bilateral ties.=DNA