BISHKEK, May 21 (DNA): Pakistan and Kyrgyzstan agreed to raise the volume of bilateral trade to$10mn.The agreement was made during a meeting between Foreign Minister Shah Mehmood Qureshi and his Kyrgyz counterpart Chingiz Aidarbekov on the sideline of Shanghai Cooperation Organization summit in Bishkek on Tuesday.

Matters of mutual interests, bilateral ties, trade and other issues were came under discussion in the meeting, said sources. Both the leaders agreed to enhance bilateral relations between the two countries. 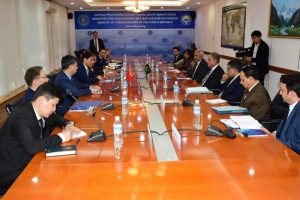 Earlier in the day, FM Qureshi arrived in Bishkek to attend two-day meeting of the Council of Foreign Ministers of Shanghai Cooperation Organization (SCO) countries in Bishkek.

Pakistani Ambassador and senior officials of Kyrgyzstan received the Foreign Minister at the airport.

The meeting would approve important documents, which will later be adopted by the Council of Heads of States meeting, to be held in Bishkek next month.

The foreign minister will deliver his remarks at the plenary session of the meeting.