2,473 people are talking about this 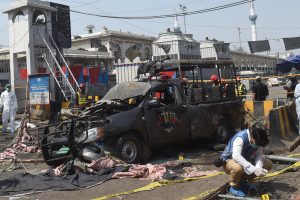 He also commiserated with the bereaved families and directed the local administration to provide best possible medical treatment to those injured in the explosion.

He expressed grief over the loss of precious lives in the incident and said those involved in such despicable incident in the holy month of Ramazan are misguided elements.

Earlier today, a suicide attack targeted a vehicle of police elite force in the immediate vicinity of Data Darbar in Lahore.

Rescue 1122 officials and police officers rushed to the spot along with a heavy convoy of police forces, and began operation and investigation, respectively.

The injured persons were shifted to nearby hospitals, where an emergency has been imposed, for their treatment. Some of the patients are said to be critical.

The explosion took place close to police vehicles near Gate 2 of Data Darbar. One of the vehicles was completely destroyed.

The shrine has been targeted previously, in a 2010 suicide attack that killed more than 40 people, and is guarded by heavy security.

An attack in Lahore in March last year left nine people dead, while a major blast targeting Christians celebrating Easter in a park in 2016 killed more than 70 people.