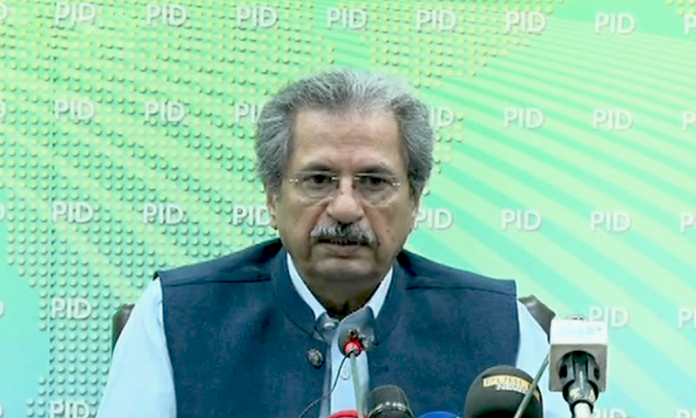 ISLAMABAD, (DNA) – Education Minister Shafqat Mehmood will head a sub-committee tasked with framing the terms of reference (ToR) for a special parliamentary committee constituted by the National Assembly speaker to probe allegations of rigging in the 2018 general elections.

The decision was taken during the second meeting of the “Parliamentary Committee on the General Elections 2018”, presided over by its chairman, Defence Minister Pervez Khattak.

Khattak recommended the name of Mehmood as the convener of the sub-committee, which was agreed to by the members of the panel.

The committee also decided upon the names of other members of the committee. Besides Mehmood, the other lawmakers who will represent the ruling coalition in the sub-committee include Information Minister Fawad Chaudhry, Barrister Saif and Sarfaraz Bugti. The opposition members in the panel will be Rana Sanaullah, Naveed Qamar, Hasil Bizenjo and Maulana Wasay.

The eight-member sub-committee will submit its recommendations to the main committee within two weeks.

NA Spea­ker Asad Qaiser had on October 16 constituted the 30-member bipartisan and bicameral parliamentary com­mittee to probe charges of rigging in the July 25 general elections.

The Parliamentary Committee on the General Elections 2018, which had been formed on the demand of the opposition parties, comprises 10 members from the Senate and 20 from the National Assembly.

As per an agreement between the government and the opposition parties, the committee comprises equal number of members from the treasury and opposition benches.

Today’s session of the committee was attended by 16 out of its total 30 members, including 8 members from the treasury and as many from the opposition.