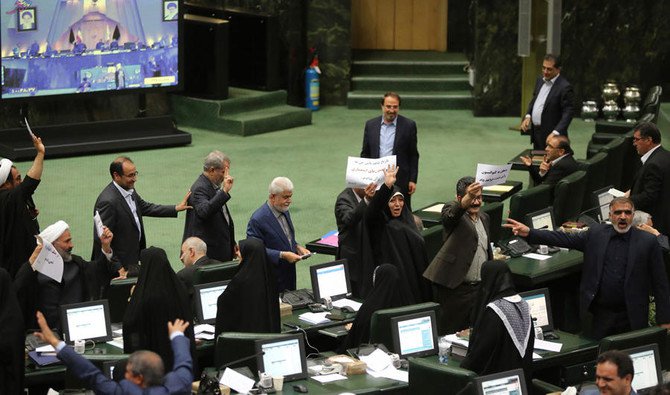 DUBAI: (DNA) –  The International Monetary Fund on Tuesday predicted Iran’s economy will sink deep in the red due to renewed US sanctions but forecast increased Saudi growth on the back of higher oil production.In its World Economic Outlook, the IMF said the oil-dependent economy of the Islamic republic is expected to shrink by 1.5 percent this year and by 3.6 percent in 2019.

In May, before US President Donald Trump announced reinstating sanctions against Tehran, the IMF had projected Iran’s economy would grow by 4.0 percent in 2018 and again next year.

The IMF said the Iranian economy was now expected to contract over the next two years “on account of reduced oil production, before returning to modest positive growth in 2020-23.”

Trump withdrew the United States from the 2015 nuclear deal between Iran and world powers in May, and his administration reimposed a round of sanctions on the Islamic republic in August.

Iranian crude exports, which reach some 2.5 million barrels per day normally, have plunged by over half a million bpd and are expected to dive further when expanded sanctions on oil take effect next month, depriving Tehran of its main source of income.

The IMF also sharply slashed growth forecasts for the whole Middle East and North Africa region due to the slump in the Iranian economy and increased energy costs.

It now projects the MENA region to grow by 2.0 percent this year and 2.5 percent in 2019, 1.2 percent and 1.1 percent lower, respectively, than it forecast in April.

“The downward revisions reflect to an important extent the worsening of growth prospects for Iran, following the reimposition of US sanctions,” it said.

The IMF, however, lifted its projections for economic growth in Saudi Arabia, the region’s biggest economy, and its oil-rich neighbors in the Gulf.

It said the Saudi economy, which contracted by 0.9 percent last year, is expected to grow by 2.2 percent in 2018 and 2.4 percent next year, raising previous projections by 0.5 percent.

The growth is being “driven by a pickup in non-oil economic activity and a projected increase in crude oil production in line” agreed by the Organization of the Petroleum Exporting Countries and independent producers, the IMF said.
Oil prices, which account for about 80 percent of Saudi public income, have increased by more than 70 percent since June last year to over $80 a barrel.

The London-based Capital Economics think-tank said last week that revenues of Saudi Arabia and the five other Gulf states are expected to rise by $200 billion this year compared to 2017 due to high oil prices and output.